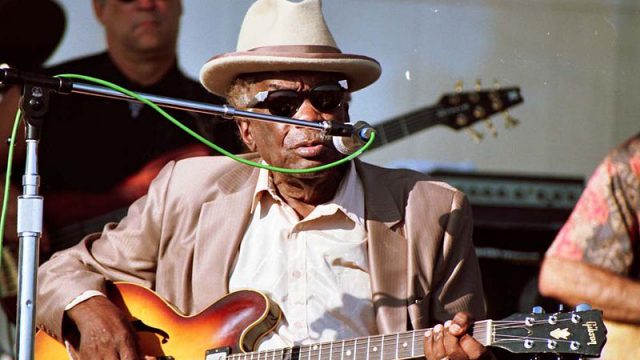 The blues is a basic bedrock source of American indigenous music. For over a century it has flourished in its own right while profoundly influencing a wide range of jazz, rhythm & blues, rock, and country-music styles, as well as Broadway musicals, classical compositions, rap and hip-hop music, and more. In Louisiana and other Southern states, blues evolved in significant part from a broad African-American folkloric genre known collectively as ante-bellum music. The Latin words ante-bellum mean “before a war,” and refer in this instance (and in most usages) to the pre-Civil War era when slavery prevailed in the South. In terms of foreshadowing the blues, two ante-bellum song forms – field hollers, and work songs – were especially important.

In field hollers, solo vocalists sang about personal concerns and/or community conditions. For the most part these singers gave little or no thought to melody, or uniform length of verses (if verses were demarcated at all) while demonstrating a penchant for bending and stretching notes in a practice that is known as melisma. These traits differ radically from the standardized structural concepts of European music and reflect, instead, the musical aesthetics of West Africa. Other West African characteristics include the prominence and popularity of improvisation, and the lack of discernible boundaries between performers and listeners. These traits remain important in contemporary African-American music.

In work songs, a leader would chant or sing a line that was then repeated by laborers who kept time to the music with tools such as axes or hoes. Singing in this manner maximized efficiency for the task at hand. The tradition of call and response which this exemplifies is another important characteristic of West African music. While many work-song and field-holler lyrics were improvised on the spot, many others drew from a vast body of “floating verses” that appeared in numerous other songs in endlessly varying combinations. The floating-verse tradition remains prominent in blues to this day, and some of the verses still used are quite archaic.

Field hollers and work songs both morphed into more modern settings, such as the rhythmic chants of the “gandy dancers” who laid railroad tracks, and the “cries” of street vendors who would sing out a list of their wares to the public. Up until Hurricane Katrina, in 2005, the street-crier tradition could still be heard in New Orleans.

A fair amount of ante-bellum music was mournful and pessimistic, reflecting the brutal environment of slavery from which it arose, and its function, in that world, as an important vehicle for emotional release. Some contemporary blues is similarly glum and cathartic. It is important to emphasize, however, that ante-bellum music and blues alike also encompass a lot of joyous, upbeat and celebratory material. In addition, besides secular songs, ante-bellum music included a wealth of religious material, and is an important source of contemporary gospel music.

The origin of the term “the blues” to denote a sad or depressed mood can be traced to the ante-bellum era, and it maybe a shortened form of the phrase “the blue devils,” a phrase with the same meaning that can be traced back to eighteenth-century Britain. While it is difficult to pinpoint exactly when or why the term blues came to denote an African-American musical genre, and/or the specific structures that denote blues songs, the first documented references to this were in the early 20th century.

Like early jazz, which made some of its most important evolutionary leaps in New Orleans, blues combines West African aesthetic traits, as identified above, with European instrumentation and such European concepts of standardized song structure as uniform verse length and regularly repeated chord progressions. The best known blues-song structure consists of verses that are twelve bars in length and utilize a 1-4-5 chord pattern. “Blue notes” – the flatted third, fifth and seventh in any given scale – are prevalently played. In twelve-bar songs, the lyrics typically consist of three lines, the first of which is repeated twice, followed a third line that offers thematic resolution, for example: “I would search all night for you, baby, lord and my search would always end in vain (repeated), But I knew all along now, darlin’, that you was hid out with your other man.” Blues songs also appear in eight-bar and sixteen bar configurations.

By the 1920s, with the advent of radio and the ascension of the record industry, blues attained national popularity as a commercial genre in its own right and as integral element of jazz and country music, among other genres. New Orleans jazz artists Jelly Roll Morton, Sidney Bechet and Louis Armstrong all recorded blues songs, as did country’s first major national star, Jimmie Rodgers, a native of neighboring Mississippi. (In one historic multi-cultural meeting, Armstrong and Rodgers recorded together in 1930.) By the 1940s self-consciously commercial sound known as rhythm & blues — which is strongly blues– based, but favored new lyrics over floating verses — became quite popular nationally, as exemplified by Louisianans including Fats Domino. A decade later, the nascent sounds of rock and rockabilly — expertly performed, for instance, by Ferriday, Louisiana’s Jerry Lee Lewis — used blues as an important stylistic component. Blues has long suffused both Cajun music and zydeco, as heard, for respective examples, in the music of accordionists Nathan Abshire and Clifton Chenier. Both men’s bluesy vocal styles were conveyed primarily in Louisiana French. And blues, Cajun, zydeco, R&B, rock and country all merge in the south Louisiana hybrid known as swamp pop, sung by such masters as Phil Phillips, Belton Richard, and Cookie and the Cupcakes. At this writing Cajun music, zydeco, and swamp-pop are experiencing a great surge in popularity.

During the past 100 years many important blues artists have emerged from every corner of the state, personifying a wide range of styles. Space constraints limit mention to just a few such few musicians here. From northwestern Louisiana, Huddie Ledbetter, a.k.a. Leadbelly (1888- 1949) played the twelve-string guitar, solo, with more hard-rocking force than many full bands. New Orleans has spawned such stylists as the urbane guitarist/crooner Lonnie Johnson (1899 – 1970), the powerful singer Marva Wright (1948 – 2010), and the youthful Kipori Woods [birth year to follow.] In Lafayette, Paul “Lil’ Buck” Senegal (born in 1944) is the equal of any blues guitarist performing today, anywhere. The Baton Rouge scene that spawned such nationally recognized blue artists as Slim Harpo (1924 – 1970) is now ably represented by Chris Thomas King (born in 1962) and Larry Garner (born in 1952.) Despite pessimistic assessments that the blues is dead — or has lost its edge due to cultural homogenization — this vital music continues to thrive and evolve throughout Louisiana.

Sandmel, Ben. From Rural to Urban, From Acoustic to Amplified: the Blues in Louisiana . An extended essay written for the Louisiana Folklife Program and published on-line at www.louisianafolklife.org .