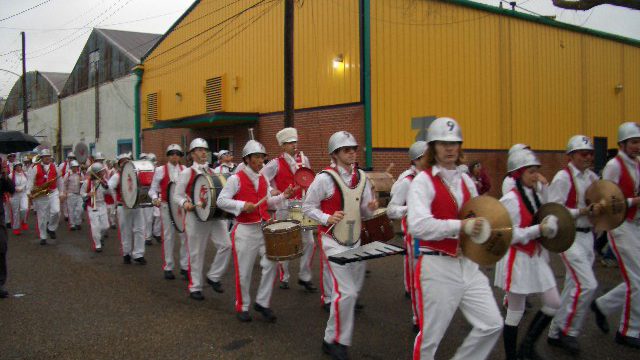 The 9th Ward Marching Band is a local high school/military style band who can be witnessed only during New Orleans Carnival season. The band was originally started by a group of friends living and playing in the 9th ward music scene including organist and inventor Mr. Quintron, Miss Pussycat, Elizabeth Macey, Judy Bolton, Jon Henry Kelly (Detonations), Lefty Parker (part owner of the Circle Bar), Strangebone (inventor of the Organ Car), Julien Fried (The Black Dwarf), MC Trachiotomy, Matt Vis (Kid Calculator), Jamie Kallel (Sex Hunter), and many more. Quintron directs the drum corps and takes the role of drum major and Eric Belleto directs and charts the horn section. The 9th Ward Marching Band’s colors are red, white, and silver. The original uniform designer and inventor of the now famous one-eyed cat with a “9” band logo is Heather Sher. This year’s uniforms were overseen by Jessica Bizer.

After the first few years, The 9th Ward Marching Band hooked up with a bunch of horn players from local jazz band Egg Yolk Jubilee. These guys — most of whom played together at Rummel high school — brought serious brass chops and marching discipline to the group. Now, years later the 9th Ward Marching band is a well-oiled 150 plus member machine that has developed a style to be reckoned with.