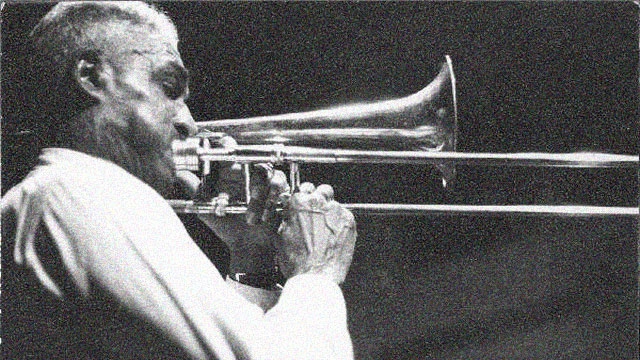 The trombone is a musical instrument in the brass family. Like all brass instruments, sound is produced when the player’s vibrating lips (embouchure) cause the air column inside the instrument to vibrate. Nearly all trombones have a telescoping slide mechanism that varies the length of the instrument to change the pitch. Special variants like the valve trombone and superbone have three valves like those on the trumpet.

The word trombone derives from Italian tromba (trumpet) and -one (a suffix meaning “large”), so the name means “large trumpet.” The trombone has a predominantly cylindrical bore like its valved counterpart the baritone and in contrast to its conical valved counterparts, the euphonium and the French horn. The most frequently encountered trombones are the tenor trombone and bass trombone. The most common variant, the tenor, is pitched in B♭, an octave below the B♭ trumpet and an octave above the B♭ tuba. The once common E♭ alto trombone became less widely used as improvements in technique extended the upper range of the tenor, but it is now enjoying a resurgence due to its lighter sonority which is appreciated in many classical and early romantic works. Trombone music, along with music for euphonium and tuba, is typically written in concert pitch, although exceptions do occur, notably in almost all brass band music where tenor trombone is presented as a B♭ transposing instrument.

A person who plays the trombone is called a trombonist or trombone player.