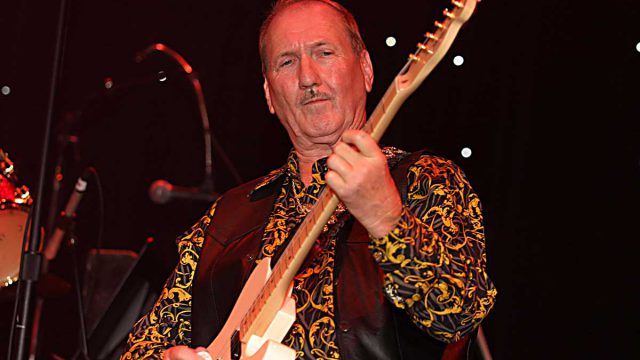 Guitarist James Burton is among the most prolific, often-recorded and highly-respected stylists in the country-rock genre — and quite likely the only one to record with both Elvis Presley and Elvis Costello. A native of Dubberly, Louisiana, the precocious, prodigious Burton began performing in bars and nightclubs around Shreveport at age 14. Such visibility garnered him a prestigious chair in the house band of the Louisiana Hayride. This weekly live radio show reached a broad audience second only to that of Nashville’s Grand Ole Opry, and reigned as one of country music’s most popular and influential programs for nearly two decades. Burton played there with such greats as George Jones, and Johnny Horton, among others.

Burton’s style draws equally on country and rock, with a strong blues element — illustrating the limitations of attempting to separate music into categories. In 1958 he unleashed a riveting, primal, bluesy solo on Dale Hawkins’ hit “Suzie Q.” Many ensuing records also became hits due to Burton’s expertise. Moving to Los Angeles, he began playing with teen heart-throb Ricky Nelson, enlivening Nelson’s 1961 hits “Traveling Man” and “Hello, Mary Lou.” In his solos for Nelson, Burton perfected a unique style based based on single-note runs that combined speed and dexterity with a laid back, unhurried feel. This amplified approach to old-time country finger-picking is often referred to as “chicken pickin’.” Burton’s work with Nelson put him in great demand for session work, inspiring younger musicians to emulate him, with varying success. George Harrison of the Beatles, for example, told Guitar Player magazine, “Those early sounds that we did, I just hated them. They sounded so puny. I mean, listening to James Burton playing on the Rick Nelson records… and we would come up with our stuff that was so feeble.”

Along with prolific studio work, Burton was highly sought for live performances. In 1965 he worked on the popular television show Shindig, assembling and leading the house band, The Shindogs. In 1969, while touring with Frank Sinatra, Elvis Presley called Burton to assemble and lead the band for Presley’s acclaimed career comeback in Las Vegas. Never one to be star-struck, Burton recalled that with Presley “we just kicked back, relaxed, and enjoyed our time together.” In 1987, Burton again served as a bandleader to the stars on an HBO Special honoring Roy Orbison. He accompanied Orbison plus special guests as Tom Waits, Jackson Browne, and Bruce Springsteen.

James Burton has succeeded so thoroughly because he always takes the role of a dedicated accompanist who showcases the performance of the featured artist at hand. He does not sing, and has only recorded two albums as an instrumental soloist. Burton has returned to Shreveport from Los Angeles, and remains active on the national scene. The Fender guitar company has created create several special instruments in Burton’s honor, and welcomed him into the Fender Hall of Fame. He is also a Rock and Roll Hall of Fame inductee, a Grammy award winner. In 2011 James Burton was listed as one of Rolling Stone’s Top 100 Guitarists of All Time. He has also been honored at home, in 2007, with a Lifetime Achievement Award from the Louisiana Division of the Arts, at the Governor’s Arts Awards ceremony in Baton Rouge.

The James Burton Foundation, in Shreveport, makes instruments and lessons available to students and aspiring musicians. Burton funds the foundation with proceeds from the annual James Burton International Guitar Festival, which convenes some of his most talented peers. A statue of Burton now stands in front of Shreveport’s Municipal Auditorium, where this great guitarist first made his name.