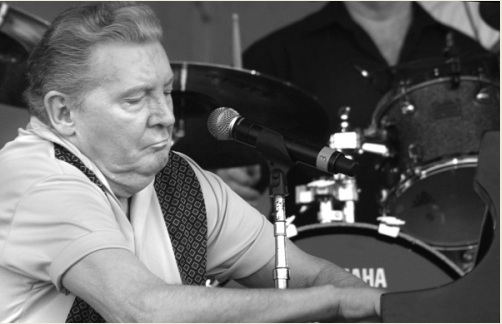 Jerry Lee Lewis (born September 29, 1935) is an important pioneer of rock music in general and the rockabilly sound. His aggressive piano style and singing represent an organic mixture of Anglo-American country music, African-American blues and R&B, the Anglo-African American/jazz-country synthesis known as western swing, and fervent gospel music that is curiously juxtaposed with feverish sexuality.

Lewis was born and raised in Ferriday, Louisiana, fertile ground for such musical cross-pollination. His exposure to the blues began as a child when he would peek in the windows of prominent club called Haney’s Big House, which booked all the major national blues and R&B artists of the day. Country music filled the air, thanks to national-level stars such as Webb Pierce, a fellow Louisianan; the popular radio program Louisiana Hayride; and a wealth of local performers who played the honky-tonks in Ferriday and nearby Natchez, Mississippi. Lewis’ first cousin, Mickey Gilley went on to become a national country star.

Ferriday is squarely situated in the South’s “Bible Belt,” an area that was and still is culturally rich in emotionally charged gospel music, in both white and black churches. As a child, Lewis often sang at Assembly of God meetings along with his cousin Jimmy Swaggart – a future celebrity preacher whose piano skills compare favorably to Lewis’. In fact, Lewis seriously considered becoming a preacher. As a teenager, he enrolled at a bible college and was expelled after three months before deciding to pursue secular music. Lewis has shouldered a lifelong emotional conflict between sacred and secular impulses.

With his substantial talent, boundless ego and maniacal stage demeanor, Lewis melded all the music he heard in Ferriday into a wild, testosterone-fueled and uniquely individual style that far exceeded the sum of its parts. By age 14, he was performing in public and legend has it that Lewis recorded a demo around 1954 at Cosimo Matassa’s studio in New Orleans. He approached Sun Records in Memphis in 1956 in search of a record deal. This was a logical move because Sun had experienced great success with a similar stylist, Elvis Presley. Lewis felt confident that his talent matched or surpassed Pres¬ley’s and Sam Phillips of Sun Records agreed.

In December 1956, Sun released Lewis’ official documented debut, a romping, up-tempo of “Crazy Arms,” which, in much gentler form, had scored a hit for the exquisite country crooner Ray Price. Phillips had sold Presley’s contract to RCA at this point, but signing with Sun made Lewis a colleague of such rockabilly/country greats as Johnny Cash and Carl Perkins. In 1957, Sun released Lewis’ “Whole Lotta Shaking Goin’ On,” succeeded by “Great Balls of Fire.” The unbridled sexuality of these songs was shocking in pop music circles of the day, and this factor, combined with Lewis’ thick Southern accent, helped define the rockabilly style. Lewis appeared all the more threatening because, by 1957, Presley had adapted a substantially toned-down image, leaving “the Killer” sole ownership of the bad-boy market.

“I know what I am,” Lewis declared years later, shortly after Elvis’ passing. “I’m a rompin’, stompin’, piano-playin’ sonofabitch. A mean sonofoabitch. But a great sonofabitch. A good person. Never hurt anybody unless they got in my way. I got a mean streak in me. Elvis did, too. He hid his. I don’t hide mine…”

After a few more hits on Sun, including “Breathless” and “High Confidential,” Lewis’ career momentum stalled. The press demonized him for marrying his thirteen year-old cousin while still wed to at least one previous wife. Unrepentant, Lewis toured actively in the 1960s and had one record, a cover version of Ray Charles’ “What’d I Say” that was moderately successful. The 1970s found Lewis marketed as a country artist, although his music did not really sound different. His country hits included, “What’s Made Milwaukee Famous Had Made A Loser Out of Me” and cover versions of the Big Bopper’s “Chantilly Lace,” Sticks McGhee’s rhythm and blues hit, “Drinkin’ Wine Spo-dee-odie” and Kris Kristofferson’s “Me and Bobby McGee.” Such wide-ranging material could not get played on commercial rock radio at the time, and today it wouldn’t be aired by commercial country stations either.

By the end of the 1980s, Jerry Lee Lewis attained the requisite age to qualify for legendary stature, as reflected by the bio-pic Great Balls of Fire” in which Lewis’ role was played by Dennis Quaid. Lewis has continued to tour and record; age and health issues notwithstanding he remains a strong performer whose new millennium albums compare favorably to his classic work. Lewis has long since left Ferriday, but he is honored in town by the Lewis Family Museum that is run in the family’s childhood home by his sister Frankie Jean Terrell.