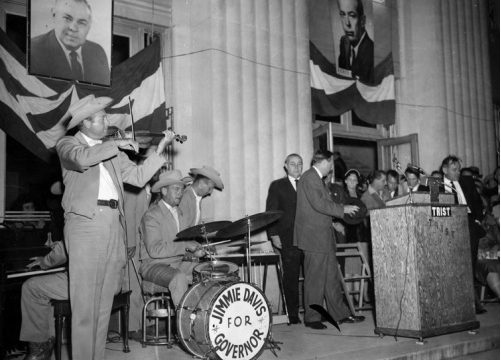 Country music encompasses an extremely wide range of material created over a broad span of time. The term itself did not appear in common usage until the mid-twentieth century. Country’s oldest origins can be traced to British folk-music traditions – including ballads (“The House Carpenter”) and fiddle tunes (“The Devil’s Dream”) – that were brought to America by English and Scots-Irish emigrants during the seventeenth through nineteenth centuries. In some remote rural areas of America, such music survived for generations, well into the twentieth century, beneath the radar of mainstream culture – although a long succession of more modern styles dramatically superseded them. Appalachia saw the heaviest concentration of such retention, but remnants of this material reached rural north Louisiana during the course of westward expansion.

Today, country music is a highly commercialized, sophisticated, high-tech industry that generates billions of dollars. (An annual two-day event, in Baton Rouge, for example – the Bayou Country Superfest – draws 75,000 ticket-buying attendees.) Musicians who learned archaic traditional material solely by oral tradition, with no exposure at all to mass media, are virtually extinct today. Even so, some observers claim that contemporary country remains grounded in such “pure” roots, and still preserves them. By extension, this viewpoint stakes out country music as the exclusive bastion of Anglo-Americans who are staunch social/political conservatives. While such self-identification certainly does characterize some contemporary country fans, country music in its totality constitutes a complex, multi-cultural, multi-ethnic hybrid and an equally diverse following.

During the 19th-century, the unadorned Anglo traditions that had survived in rural isolation began to interact with a wealth of other genres. For instance, the banjo – an African-rooted instrument – was increasingly used to play the old British repertoire alongside the fiddle, as was the guitar, an instrument of Spanish origin. Anglo-American music also began to absorb such African and African-American musical aesthetics as syncopation, improvisation, melisma, and the porous conceptual boundary between performer and audience. Conversely, Anglo-American songs such as “Little Sally Walker” took root in African-American folk tradition.
Beyond this grassroots/folkloric level, one significant manifestation of such cultural interchange was the rise to prominence of minstrel shows. Highly offensive by today’s standards, the minstrel shows featured white performers in blackface make- up who purported to portray African-American culture and the worst sort of demeaning racial stereotypes resulted. In purely musical terms, the minstrel shows expanded the range of black and white interaction. Some material used in and/or written for these shows attained long-standing popularity in mainstream America, long after the shows themselves ceased. A case in point is the work of the talented songwriter Stephen Collins Foster, of “Oh Susanna!” fame.

As the nineteenth century progressed, songs introduced by minstrelsy were absorbed by a much broader body of popular music. Some of this material was categorized with the genteel catch-all term “parlor music,” while other facets, by contrast, heralded the arrival of ever-changing new dance crazes. Spirituals, hymns, and shape-note singing factored into this mixture as well. Meanwhile the on-going synthesis of Anglo- and African music had evolved into a distinctly American folk-rooted sound with an extensive repertoire of shared songs such as “John Henry.” At the same time, a variety of other ethnic groups continually contributed to the nation’s musical métissage, in tandem with waves of immigration. Immigrants played a key role in the emergence of vaudeville, which had a strong musical component that drew on a wealth of European traditions. Immigrants also contributed to the growing popularity of brass-band music around the nation. The interaction of these European traditions and African-American musical aesthetics spawned the emergence of jazz and ragtime. All of these diverse sources, combined with British folk-music roots, coalesced into what would eventually come to be called country music.

In 1900 a New York newspaper printed the first documented usage of the word “hillbilly.” The term caught on quickly. It denoted rural white Southerners, sometimes in a condescending tone, although not to the degree of pejorative connotation associated with it today. As the recording industry began to gather momentum, record-company executives realized that this “hillbilly” segment of the American populace represented both a great customer base to purchase recordings of music from within their own community, and a rich source of musicians to perform it. The first record to be categorized, for marketing purposes, as “hillbilly music,” was released in 1922. Like most musical-marketing nomenclature, though, hillbilly music embraced a wide range of styles, from the rural, rambunctious sound of banjoist Uncle Dave Macon to the smooth crooning of Vernon Dalhart, and the blues-drenched singing of Jimmie Rodgers. Rodgers even featured Louis Armstrong as a guest trumpet soloist on his “Blue Yodel Number 9,” in 1930. The record industry ascended at the same time as the new medium of radio, radically expanding the range and accelerating the pace of musical cross-pollination. This included the emergence of several important African-American country musicians, including the harmonica virtuoso DeFord Bailey, in the 1930s; the banjo player and bandleader Murph Gribble, in the 1940s; and singer Charlie Pride, whose career began in 1965 and is still going strong at this writing.

In Louisiana, “hillbilly” music was more prevalent in the state’s northern/Anglo/English-speaking parishes than in the Francophone south, and Shreveport was an important hub of activity. In 1927 the Shreveport radio station KWKH began broadcasting The Jimmie Davis Show. Davis later gained fame for popularizing the song “You Are My Sunshine” and serving two terms as a segregationist governor of Louisiana. Two decades later KWKH started broadcasting the Louisiana Hayride, a live performance show of comparable national importance to Nashville’s Grand Ole Opry. The Louisiana Hayride helped launch the careers of Hank Williams, Sr., Johnny Cash, and Elvis Presley, as well as such native Louisianans such as fiddler Dobber Johnson, Webb Pierce — a classic singer in the mid-century honky-tonk style — and guitarist James Burton, who went on to become one of the music industry’s most prolific session players. Several similar yet smaller radio shows developed in north Louisiana, including the Ward5 Jamboree in Columbia, in Caldwell Parish. By this time, the term “hillbilly music” had given way to “country and western” in trend-setting music-industry publications such as Billboard. “Western” referenced the popularity of “singing cowboy” artists such as Gene Autry. When this fad faded, by the early 1960s, the trade publications went with the shortened term “country,” and that designation prevails today.

At this writing, several Louisianans are considered country stars, including Hunter Hayes of Breaux Bridge, in Saint Martin Parish, and Tim McGraw, of Delhi, in Richland Parish. While their highly-commercial music gets the lion’s share of attention, via major exposure on radio and television, north Louisiana country-music is also represented by a wide range of other styles. Noted old-time country fiddlers and western-swing fiddlers, past and present, include Ben Robinson, Ray Beebe, Fred Beavers, Tex and Mary Grimsley, Bill Kirkpatrick, Curry Perkins, Ron Yule, and Amanda Dark. Bluegrass – a form of country characterized by up-tempo songs with long instrumental passages that emphasize solo technique – is more typical of Appalachia than Louisiana. Even so it has been expertly represented by musicians including the Driskill Mountain Boys, from rural Livingston Parish, and the Grammy-winning Cox Family, from Cotton Valley in Webster Parish. While the Coxes’ music has some strong similarities to bluegrass, they prefer it to be described as “old-time” country – once again underscoring the fluid and subjective nature of musical terminology.

Another country style more typical of Appalachia than Louisiana is close-harmony duet singing, which has been expertly represented by the Whitstein Brothers, from Pineville in Rapides Parish. Close-harmony singing has also exerted great influence on rock and pop music. In the late 1950s and early 1960s, a close-harmony duo from Kentucky known as The Everly Brothers, applied their background in close harmony to pop-rock, with huge commercial success. The Everly Brothers were idolized by The Beatles, who imitated their sound among other influences, ironically bringing a British style back to Britain, full circle and centuries later. And the related sound of rockabilly, as partially originated in Louisiana by Jerry Lee Lewis, had strong roots in both honky-tonk country and rural-styled gospel, as well as African-American blues and R&B.

In south Louisiana, with its defining Acadian/Cajun/Creole culture and still-extant French-speaking community – country music per se is less popular than the regional sounds of Cajun music, zydeco, and swamp-pop. There has, however, been significant interaction for nearly a century. In the 1930s and ‘40s, the Hackberry Ramblers created a pioneering blend of Cajun music sung in French and country sung in English. Their English repertoire was strongly influenced by the western swing sound of Bob Wills and the Texas Playboys. Wills’ work also inspired the popular Cajun fiddler Harry Choates. Hank Williams’ hit song “Jambalaya” (1952) makes verbatim use of the melody of a Cajun song known as both “Grand Texas” and “L’anse couche-couche.” Conversely, the Cajun song “The Belizaire Waltz,” by the noted accordionist Nathan Abshire, takes its melody from Roy Acuff’s “The Precious Jewel.” Jimmy C. Newman, from Mamou, in Evangeline Parish, was among the first bilingual members of the Grand Ole Opry, singing in both English and Cajun French. And D. L. Menard, a.k.a. “The Cajun Hank Williams” also made his name singing in both languages, although he preferred to stay based in Louisiana.

This multi-cultural mélange continues today, as comprehensively exemplified by Yvette Landry, of Breaux Bridge. Landry leads her own country band, performing all-original material that she sings, in English, in a honky-tonk style a la Tammy Wynette and Loretta Lynn. Landry also sings with equal fluency in French and plays several instruments in the Cajun bands the Lafayette Rhythm Devils, Balfa Toujours, and Bonsoir, Catin. Finally, while a core audience for country does exist in New Orleans, the curious fact is – given its stature as a world-class musical city – that’s there is far less country-music activity in the Big Easy than in the rest of Louisiana.