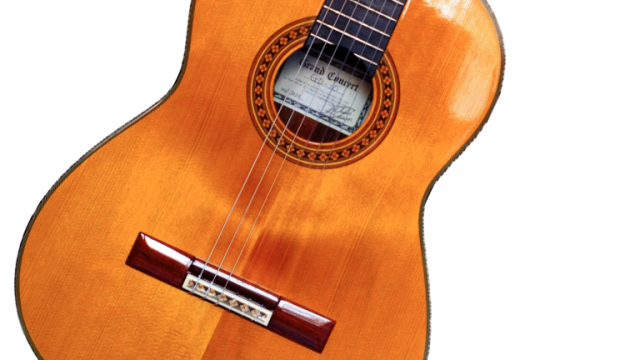 A guitar is a popular musical instrument that makes sound by the playing of its (typically) six strings with the sound being projected either acoustically or through electrical amplification (for an acoustic guitar or an electric guitar, respectively). It is typically played by strumming or plucking the strings with the right hand while fretting the strings with the left hand. The guitar is a type of chordophone, traditionally constructed from wood and strung with either nylon or steel strings and distinguished from other chordophones by its construction and tuning. The modern guitar was preceded by the lute, the vihuela, the four-course Renaissance guitar, and the five-course baroque guitar, all of which contributed to the development of the modern six-string instrument.

Electric guitars, introduced in the 1930s, use an amplifier that can electronically manipulate and shape the tone. Early amplified guitars employed a hollow body, but a solid body was eventually found more suitable, as it was less prone to feedback. Electric guitars have had a continuing profound influence on popular culture. Guitars are recognized as a primary instrument in genres such as blues, bluegrass, country, flamenco, folk, jazz, jota, mariachi, metal, punk, reggae, rock, soul, and many forms of pop.