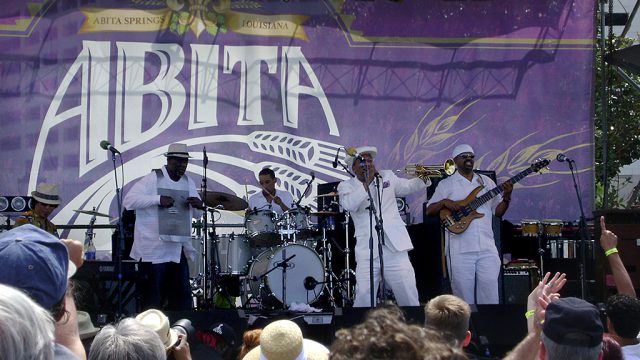 Kermit Ruffins founded the Barbecue Swingers in 1992, a traditional jazz quintet. Kermit is famous for cooking barbecue at his shows. Every Thursday since the early 1990s, Kermit Ruffins and the Barbecue Swingers have played a show at Vaughan’s Bar in the Bywater neighborhood which is very popular with both locals and visitors. His 2007 Basin Street Records release, Live at Vaughan’s, was recorded during one of his performances at the establishment.

He has also performed at hundreds of funerals during his career in The Crescent City. In 2003 the band received a nomination at the Big Easy Entertainment Awards, which recognizes local talents. He currently appears as himself in HBO’s Treme as a recurring character.

Kermit Ruffins (born December 19, 1964) is an American jazz trumpeter, singer and composer from New Orleans, Louisiana, United States. He has been influenced by Louis Armstrong and Louis Jordan. Ruffins often accompanies his songs with his own vocals, and he says that the highest note he can hit on trumpet is a high C. Most of his bands perform New Orleans jazz standards, though he also composes many of his own pieces. Jon Pareles of The New York Times wrote, “Mr. Ruffins is an unabashed entertainer who plays trumpet with a bright, silvery tone, sings with off-the-cuff charm and never gets too abstruse in his material.”