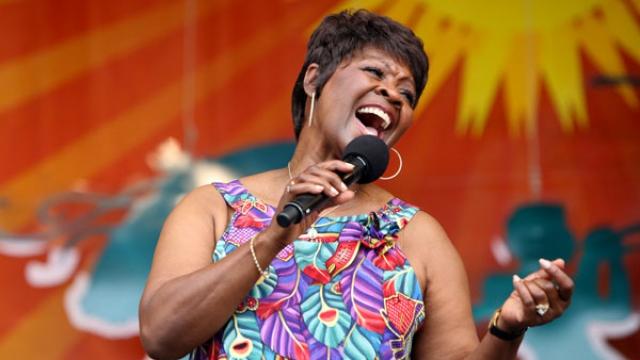 Irma Thomas (born 1941) stands tall among the major artists to emerge during the Golden Age of New Orleans rhythm & blues. Since debuting with the saucy “You Can Have My Husband, But Please Don’t Mess With My Man” in 1959, the vocalist known as “The Soul Queen of New Orleans” recorded a number of the city’s timeless cultural anthems, including “It’s Raining,” which Allen Toussaint wrote and produced for Thomas in 1962. Many New Orleanians know this number by heart and audiences often sing along to every word when Thomas performs it. New Orleans bands representing a variety of genres are expected to play “It’s Raining” upon request.

Thomas is a remarkably expressive and affecting singer with a great sense of drama and dynamics. Her appeal is not based on vocal pyrotechnics or adventurous phrasing but rather on her compelling power to inhabit a song’s lyrics and communicate them in a completely convincing manner. After 55 years in the music business, Thomas’ voice has aged like a fine wine. It is slightly deeper and richer in than in decades past, yet she has not suffered any loss of range, pitch or nuance. As she told the New Orleans Times-Picayune in 2013, “A lot of folks who are in this business at [my] age, their voices are on the way out the door. They’re straining to get a halfway decent note out. I’m blessed. I don’t have that problem. In fact, I’m finding that my voice seems to be getting a little stronger. I’m able to hit notes that I didn’t think I could hit. Maturity helps. I’m thankful that I’m still capable.”

Thomas, like many R&B musicians (and blues and country singers, too) first sang publicly in her church choir as a little girl. She made her professional debut in 1958 when while working as a nightclub waitress, she sat in with the R&B band led by singer and pianist Tommy Ridgley. Thomas was instantly fired from her waitressing job, but Ridgley introduced her to Joe Ruffino, the owner of the New Orleans-based labels Ric and Ron. “You Can Have My Husband, But Please Don’t Mess With My Man” was released by Ron in 1959. In 1961, Thomas went to work with producer Allen Toussaint at the New Orleans-based Minit Records. Thomas was a label mate of other estimable young R&B artists such as Ernie K-Doe, Aaron Neville, Jesse Hill, and Benny Spellman. They often spent their days together at Toussaint’s parents’ house, rehearsing material before recording it at Cosimo Matassa’s studio. Thomas recorded the K-Doe composition “I Done Got Over” and other Toussaint songs including “Cry On,”“Hittin’ On Nothing,” “I Did My Part” (a.k.a. “If You Were Here”) and “Ruler of My Heart.” The latter number was re-recorded by the great Georgia R&B singer Otis Redding under the title “Pain In My Heart.” Toussaint remained credited as the writer, earning the attendant royalties on both recordings, but Redding’s cover version pushed Thomas’ rendition out of the marketplace.

When the Los Angeles-based Imperial Records purchased Minit in 1963, they also signed Thomas. In 1964, Imperial released Thomas’ original “I Wish Someone Would Care,” a powerful tale of heartbreak, backed by the spirited, up-tempo “Breakaway.” Thomas’ next Imperial release proved to be a re-run of her experience with “Ruler In My Heart.” In 1964, she recorded a strong cover version of an obscure song entitled “Time Is On My Side,” but early in 1965, another cover version by the British blues-rock band, the Rolling Stones, soared to Billboard’s Top Ten and pushed Thomas’ record aside.

Despite such setbacks, Thomas continued to record and tour rigorously around the southern states, playing for African-American audiences on the “chitlin’ circuit” and for white crowds at college fraternity houses. Various record deals came and went with labels including Chess and Cotillion, resulting in high-quality material. Thomas also recorded an odd “answer song” entitled “This Is A Man’s – Woman’s World,” in response to James Brown’s 1967 hit, “It’s A Man’s World,” but little commercial success ensued. In the early 1970s, Thomas moved to Los Angeles, where she worked a day job and performed occasionally with a group of expatriate New Orleans musicians who had moved there en masse a decade earlier. In 1974, Thomas returned to New Orleans and recorded several albums through the remainder of the decade. One of them, Safe With Me, on the Baton Rouge-based label RCS (Record Company of the South) is considered a late ‘70s southern-soul classic.

In 1986, Thomas embarked on a long professional relationship with producer Scott Billington, which continues at this writing. Their collaboration has resulted in ten albums for Rounder Records. These include a gospel collection, Walk Around Heaven (1999) an album of vocal-piano duets entitled Simply Grand (2008), a Grammy Award-nominated collaboration with Marcia Ball and Tracy Nelson entitled Sing It! (1998), and the poignant post-Hurricane Katrina album After The Rain, which won a Grammy Award as the Best Contemporary Blues Album of 2006.

Thomas lost her home in Hurricane Katrina, as well as her popular nightclub, The Lion’s Den. After returning to New Orleans, she served as a tireless civic booster and a strong supporter of recovery efforts. One of the most striking such moments occurred in 2006 – at the first New Orleans Saints football in the Superdome following that facility’s post-Katrina renovation – when Thomas and Allen Toussaint performed “The Star Spangled Banner.” Thomas’ annual Mother’s Day performance at the New Orleans’ Audubon Zoo is a beloved event, as is her yearly tribute to Mahalia Jackson in the Gospel Tent at the New Orleans Jazz & Heritage Festival. In 2010, Irma Thomas was included on National Public Radio’s select list of 50 Great Voices “from around the world and across time.”