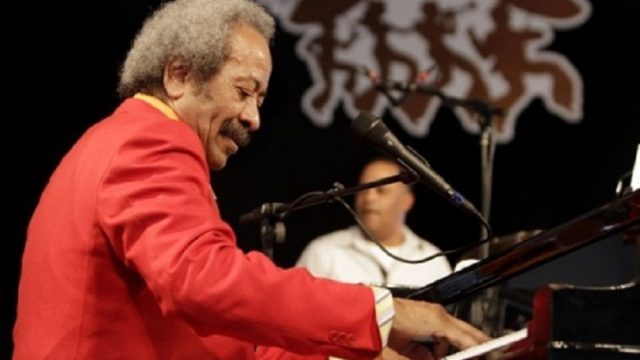 Allen Toussaint (born 1938) is a pianist, songwriter, producer, arranger, vocalist and performer who is renowned as a renaissance man of New Orleans rhythm & blues and a major second-generation architect of the genre’s development. Toussaint attained national/global prominence in the mid-1970s as a leading figure in contemporary popular music. Toussaint remains in peak form, maintaining an active schedule of touring and recording and receiving a steady stream of prestigious awards and accolades.

Toussaint was raised in the Gert Town section of New Orleans. He became interested in music at an early age and took some lessons from a neighborhood blues musician named Ernest Penn. Toussaint listened carefully to records and radio broadcasts. His favorites included nationally popular blues and boogie-woogie pianists as Albert Ammons, Lloyd Glenn and Ray Charles, and hometown hero Professor Longhair, whose blues/R&B style reflected the city’s Afro-Caribbean heritage.

By the time he was a teenager, Toussaint was playing in the Flamingoes, a band whose members included guitarist Snooks Eaglin. Toussaint made his professional, live-performance debut at 17 as a last-minute substitute for Huey “Piano” Smith (known for his hit, “Rockin’ Pneumonia and the Boogie Woogie Flu”). Toussaint frequented the Dew Drop Inn, then the epicenter of New Orleans’ burgeoning rhythm & blues scene. He accompanied a range of local and national artists at the Dew Drop and made connections to work elsewhere. One important figure who recognized Toussaint’s budding talent was rhythm & blues trumpeter, producer, arranger and bandleader Dave Bartholomew. Renowned for his work with Fats Domino, Lloyd Price and Smiley Lewis, Bartholomew recorded several of his own New Orleans R&B classics.

In 1957, Ember, a New York-based record label, hired Toussaint to produce the instrumental hit, “Walking With Mr. Lee” by saxophonist Lee Allen, best known for his fiery solo work on hits by Fats Domino and Little Richard. In 1958, under the name Al Tousan, Toussaint recorded an album of instrumentals for RCA, The Wild Sound of New Orleans. It did not sell well, but included a song entitled “Java,” co-written by Toussaint, which became a hit in 1964 for New Orleans trumpeter Al Hirt. This marked the first of many songs penned by Toussaint that were hits for other artists. (Most such other artists were singers, but Toussaint’s instrumental, “Whipped Cream” scored a hit in 1966 for trumpeter Herb Alpert, and was subsequently used as the theme for the popular television show, The Dating Game.)

In 1959, Toussaint became a founding partner and the house songwriter, producer, and arranger for a new label Minit, which was based in New Orleans and recorded at the studio of famed engineer Cosimo Matassa. Toussaint wrote, arranged, and produced crafted classic New Orleans R&B material for Minit artists including Ernie K-Doe (“Mother-In-Law,” “A Certain Girl”), Irma Thomas (“It’s Raining”), Benny Spellman (“Fortune Teller,” “Lipstick Traces,”), and Aaron Neville (“Wrong Number,” “Let’s Live.”) K-Doe’s “Mother-In-Law” was the first record by a New Orleans artist and recorded in New Orleans to reach number-one on the national pop and R&B charts. Minit stayed in business until 1963 and its success established Toussaint’s national reputation in R&B circles. He wrote catchy, deceptively simple songs, always tailored to the voice of the specific artist, and effectively showcased that voice with eloquently uncluttered production. Toussaint’s productions for Minit still hold up as timeless classics of the New Orleans R&B genre.

Following two years in the military, Toussaint teamed up with business partner Marshall Sehorn, forming several of their own record labels and licensing their recordings to other, bigger companies. Toussaint’s hit productions from the 1960s through the early 1970s included singer Lee Dorsey’s “Ride Your Pony,” “Get Out My Life, Woman,” and “Workin’ In A Coal Mine,” and “Who’s Gonna Help Brother Get Further?” This latter title, as well as “Yes We Can” and “On Your Way Down” featured accompaniment by the Meters, a New Orleans R&B band, who became Toussaint’s core studio aggregate. The Meters also recorded their own songs, produced by Toussaint, including the hit, “Cissy Strut” (1969), “Chicken Strut,” (1970), “Look-Ka Py Py” (1970) and “Hey Pocky-Way,” (1974) that are regarded as milestones in the emergence of the genre that came to be known as funk.

Toussaint’s career expanded in exciting new directions in the 1970s. He recorded his first albums as a featured artist and singer, including “From A Whisper To A Scream” (1970), “Life, Love and Faith” (1972), “Southern Nights” (1975) and “Motion” (1977). This was a major step for a man who had preferred to work behind the scenes on other people’s projects. However, this work led to one of Toussaint’s greatest successes when singer Glen Campbell’s rendition of “Southern Nights” scaled the national country and pop charts in 1977. As Toussaint’s renown grew beyond the confines of New Orleans and the world of R&B, he was hired by rock group, The Band to write horn arrangements for their albums Cahoots and Rock of Ages. In 1973, he produced Dr. John’s national Top Ten hit, “Right Place, Wrong Time,” followed by Dr. John’s brilliant album, “Dessitively Bonaroo” in 1974. In 1975, now working in his own studio, Sea-Saint, Toussaint produced the hit “Lady Marmalade” for R&B vocal trio LaBelle, led by Patti LaBelle, as well the album Venus and Mars for the former Beatles’ bassist Paul McCartney.

In 1982, Toussaint was prominently featured in director Stevenson Palfi’s acclaimed documentary film Piano Players Rarely Ever Play Together, alongside his keyboard heroes Professor Longhair and Isidore “Tuts” Washington. The 1980s and early 1990s, Toussaint served as performer, accompanist, composer, and musical director for the Broadway and off-Broadway theatrical productions of Staggerlee and The High Rollers Social Aid and Pleasure Club. Toussaint’s tireless civic spirit and charitable work was typified in 1985 by starting New Orleans Artists Against Hunger and Homelessness, which he co-founded with singer Aaron Neville.
In 1996, Toussaint cofounded NYNO Records (the acronym stands for New York/New Orleans) with business partner Joshua Feigenbaum, who was based in Manhattan and produced NYNO albums by singers Larry Hamilton, Wallace Johnson, Grace Darling, Oliver Morgan (of “Who Shot The La-La” fame), and trumpeter James Andrews. Toussaint was inducted into the Rock and Roll Hall of Fame in 1998.

Allen Toussaint had attained the gravitas of a respected music elder but he never stopped to rest on his laurels. Hurricane Katrina had a serendipitously beneficial effect on Toussaint’s career. He evacuated to New York, where he began performing regularly at Joe’s Pub, a prestigious venue. This led to a Grammy-nominated collaborative album with Elvis Costello entitled The River In Reverse (2006), which focused on Toussaint’s original material and some of his lesser-known songs.

In 2009, Toussaint referenced the river again with the Grammy-nominated The Bright Mississippi, which marked his first exploration of traditional New Orleans jazz. Toussaint’s 2013 album Songbook, consisting of solo performances, recorded live at Joe’s Pub, garnered yet another Grammy nomination. It was highlighted by a stunning reworking of “Southern Nights,” which, in addition to singing and playing the song’s familiar verses, Toussaint added a lengthy, poignant and highly evocative monologue in which he recalled early childhood visits to his Creole French-speaking relatives in rural Terrebonne Parish.
“I felt warm and saved and very much loved,” he recalled, moving many in the audience.

In 2013, Toussaint received an honorary degree from Tulane University and a National Medal of Arts that was bestowed upon him by President Barack Obama during a ceremony at the White House.
President Obama said, “…Allen Toussaint is being honored here for his incredible contributions to the rhythm and blues and jazz music of his beloved New Orleans. After Katrina battered his hometown and Allen was forced to evacuate, he did something even more important for his city – he went back. And since then, Allen has devoted his musical talent to lifting up and building up a city. And today, he’s taking the stage all over the world, with all kinds of incredible talent, doing everything he can to revive the legendary soul of the Big Easy.”

11 tracks
We use cookies to ensure that we give you the best experience on our website. If you continue to use this site we will assume that you are happy with it.Ok