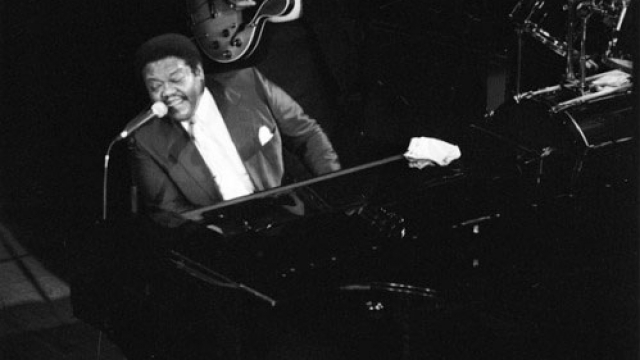 If Mount Rushmore ever adds on a “Founding Fathers of Rock Music,” section, look for New Orleans pianist and singer Fats Domino to be prominently featured. Domino has profoundly influenced the popular music of the past 60 years, ever since his first hit, “The Fat Man,” scaled the national R&B charts in 1950. Domino differed distinctly from his seminal rock colleagues – including Chuck Berry, Little Richard, and Jerry Lee Lewis in one important sense. During an era when rock was considered subversive, threatening, and far too overtly sexual, Domino maintained a virtually asexual persona and stage presence that did not seem the least bit rebellious.

Domino’s repertoire also included adaptations of such sentimental Tin Pan Alley songs as “Blueberry Hill” and “Red Sails In The Sunset.” Domino put his own stamp on these numbers with such signature touches as piano triplets and warm, subtle crooning. His keyboard work left a strong stamp on both South Louisiana swamp pop and Jamaican ska music. Domino’s vocal style also reflected the New Orleans-Caribbean connection because his thick Creole accent suggested, at times, that he spoke English as a second language.

Domino’s ancestors were rural plantation workers from French-speaking Creole communities in Louisiana’s River Parishes, upstream from New Orleans. Relocating to the city’s lower Ninth Ward, they continued to maintain many trappings of country life while also absorbing urban music. Domino learned piano from his cousin, Harrison Verrett, and after that his rose to fame rather quickly. Trumpeter, songwriter, producer-arranger and bandleader Dave Bartholomew, who heard Domino playing in local bars, arranged a meeting with Lew Chudd, head of the major national label, Imperial Records. Chudd signed Domino to Imperial, and Bartholomew produced “The Fat Man,” a sanitized version of “The Junker Blues,” by New Orleans blues pianist Champion Jack Dupree. This hit marked the start of a long and productive relationship between Domino and Bartholomew, thanks to both of their prodigious talents and the innovative expertise of audio engineer recording Cosimo Matassa. A succession of top ten records followed, including “Walking To New Orleans,” Blue Monday,” “Ain’t That A Shame,” “I Want To Walk You Home,” “Blue Monday,” “I’m Walking,” and “I’m Ready.” As a result Fats Domino stands just behind Elvis Presley as early rock’s top-selling recording artist. (Such terminology is somewhat imprecise, however; as Domino commented in 1956, “Well, what they call rock ‘n’ roll is rhythm & blues, and I’ve been playing it for fifteen years in New Orleans.”) Domino further increased his already impressive sales through appearances in the films “The Girl Can’t Help It,” “Shake, Rattle and Rock,” “Jamboree,” and “The Big Beat,” and national television performances on programs hosted by Dick Clark, Ed Sullivan, Perry Como, Dick Clark, and Steve Allen.

When records by Domino and these colleagues raced up the charts, many major record companies decided to record in New Orleans to capture the intangible hit-making qualities generated by the city’s studio musicians. (These accompanists included drummer Earl Palmer, guitarist Justin Adams, and saxophonists Alvin “Red” Tyler, Lee Allen, and Herbert Hardesty.) Musicians such as Little Richard, who was not a New Orleanian, were nonetheless sent to record in New Orleans at Cosimo Matassa’s studio, resulting in such huge hits as “Tutti Frutti.”

New Orleans’ liberated feel, as well its Afro-Caribbean rhythms were also evident on such Domino hits as “I’m Walking,” with its syncopated, second-line beat that epitomized the porous boundary between New Orleans R&B and the city’s rich jazz tradition. Muddying the boundaries between genres even further, Domino also made succeeded in the country-music field with “Valley of Tears,” “Whiskey Heaven” and his exciting adaptation of Hank Williams’’ “Jambalaya on the Bayou,” which uses the melody of an old Cajun song known variously as “Grand Texas,” and “L’anse couche-couche.”

Domino’s run of Top Ten hits ended in the ‘60s, but his popularity has never waned. The late ‘60s found him marketed to a different demographic via cover versions of Beatles’ songs such as “Everybody’s Got Something To Hide Except Me and My Monkey” and “Lady Madonna.” Domino continued to tour until the 1995, although continually to cutting back his schedule in order to stay at home in the Lower Ninth Ward. Until Hurricane Katrina, Domino never left his old neighborhood, even though he had the means to live anywhere he wanted.

During Hurricane Katrina, in 2005, a small motorboat rescued Domino from his flooded
house in one of the more dramatic cultural moments of that disaster. In 2006, Domino released “Alive and Kicking,” an album of new material that was acclaimed as a morale-boosting symbol of New Orleans’ recovery. In 2007, a coterie of stars – including Neil Young, Norah Jones, Toots and the Maytals, Paul McCartney Robbie Robertson, Robert Plant, Lucinda Williams and Olu Dara – contributed their renditions of Domino songs to the two-CD tribute album Goin’ Home. Domino made his last public appearance at the famed New Orleans nightclub, Tipitina’s, to celebrate the album’s release. Although Domino no longer performs, he still goes out on the town on occasion, and he remains one of New Orleans’ most beloved and iconic figures.

Up From The Cradle of Jazz: New Orleans Rhythm & Blues Since World War II, Jason Berry, Jonathan Foose, and Tad Tones, University of Georgia Press, 1986 (soon to be reissued by press at U of Louisiana at Lafayette)