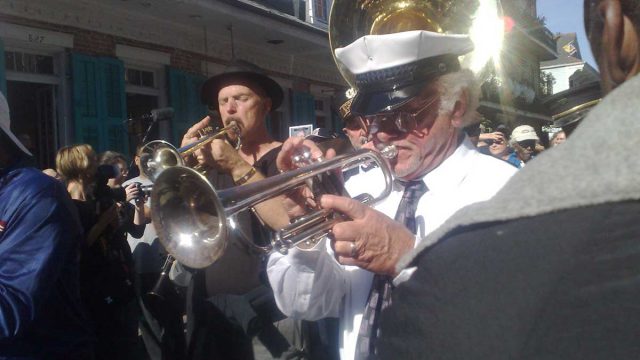 John Brunious, Jr. was born October 12, 1942 into a Louisiana Creole family, the eldest son of John “Picket” Brunious, Sr., one of the founding fathers of jazz trumpeters in New Orleans, and Nazimova “Chinee” Santiago. His younger brother, Wendell Brunious and later his nephew, Mark Braud, succeeded John as jazz trumpeters and bandleaders of the Preservation Hall Jazz Band.

Brunious’ initial inspirations were Dizzy Gillespie and Maynard Ferguson, but he had a continued interest in older styles of jazz. He was a member of the Preservation Hall Jazz Band from 1980 until his death in 2008.

The events of Hurricane Katrina caused him to lose many of his home and all of his family possessions. He also spent several days at the New Orleans Convention Center before evacuation to Arkansas. Brunious and his family later moved to Orlando, Florida.

John Brunious died of a heart attack on February 12, 2008 in Orlando, Florida where he resided with his wife and stepdaughter.