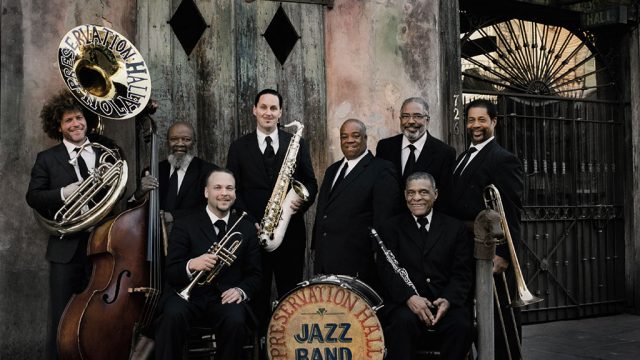 The importance of the Preservation Hall Jazz Band cannot be overstated. Started in 1961 by Larry Borenstein and Allan and Sandra Jaffe in an art gallery in the French Quarter, this band provided an outlet and a venue for musicians who invented jazz or who learned directly from those who did invent this music. The band has taken New Orleans jazz all over the world via tours and recordings, ensuring that it would not die out. In the 21st century, the Preservation Hall Jazz Band has continued playing this music while collaborating with more pop and rock oriented musicians as well as with other types of roots musicians.

The start of Preservation Hall and the jazz band that became famous for playing there starts in the 1950s. Art dealer Larry Borenstein opened Associated Artists, a gallery at 726 St. Peter Street in the French Quarter and and recruited local jazz musicians to jam there for tips and donations. At that time, the places where such musicians could play were few and far between. Local and national interest in this music was at a low ebb. The musicians who played such as George Lewis, Punch Miller, Billie and De De Pierce, Louis Nelson, Kid Thomas Valentine, Percy and Willie Humphrey, the popular Sweet Emma Barrett, and many others were getting up in years. Two visiting jazz fans, Allan and Sandra Jaffe chanced upon these performances and were so enchanted by them that they moved to New Orleans. As these sessions grew in number, Borenstein moved his gallery next door and turned the running of the performance space over to the Jaffes. Borenstein had been sponsoring the gigs under the organization “The New Orleans Society for the Preservation of Traditional Jazz.” The Jaffes shortened it to “Preservation Hall,” and the legend was born.

This new hall with this old music gained the attention of first local news media, and then national ones. With great foresight, Jaffe realized that the longevity of the hall, the musicians, and the music they made would be greatly aided if they toured. In 1963, he put together a series of dates in the Midwest by the newly named Preservation Hall Jazz Band. Their tours in the 1960s took them to far-flung places such as Japan and Thailand and had them paired for concerts with everyone from the Grateful Dead at the Filmore West to Steppenwolf of “Born To Be Wild” fame.

One of those early gigs at the Guthrie Theater in Minneapolis became their first record, “Sweet Emma and the Preservation Hall Jazz Band” in 1964. A second one came out in 1966 that featured Billie and De De Pierce. As certain musicians passed or stopped playing, others came to take their place. The Humphrey brothers, Willie on clarinet and Percy on trumpet, led the band in the 1970s and 1980s. Joseph “Cie” Frazier continued on drums and Emmanuel Sayles and Narvin Kimball switched off on banjo. The band came to be the nationally known standard on traditional New Orleans music. Younger musicians came up in an informal apprentice type situation and were integrated into the band. Trumpeter Wendell Brunious, clarinetist Michael White, and many others entered the band this way. Also, several Europeans players who had come over in the 1960s and 1970s to learn the music and eventually settled here became members including pianist Lars Edegran from Sweden and trumpeters Clive Wilson and Orange Kellin from England. Even the passing of Allan Jaffe in 1987 did not stop the band as his wife took over and his son Benjamin who had grown up around Preservation Hall slowly took up the reins.

The displacement of the band across the United States after Hurricane Katrina and the Federal Floods reinforced their already deep dedication to the music. To preserve the music and the musicians, Preservation Hall started The Preservation Hall Music Outreach Program and lent their talents to the New Orleans Musician’s Hurricane Relief Fund.

In addition, in the late 1990s and early 2000s, the audience for this music had aged as had some of the musicians. In order to keep the music relevant and to attract a broader range of listeners both young and old, Preservation Hall initiated collaborations with more modern musicians and musicians who played in other genres. Also, They played on several songs for the Blind Boys of Alabama’s “Down In New Orleans.” That record won a Grammy Award, and it fueled further collaborations with hip-hop musician Mos Def and bluegrass virtuosos the Del McCoury Band. In this vein he band recorded a compact disc called “Preservation” that featured different vocalists singing traditional numbers with the band backing them. Everyone from Tom Waits to Ani Difranco to Jason Isbell to Richie Havens to My Morning Jacket’s Jim James sang standards, and sang them well. The record showed how applicable to current times songs like “La Vie En Rose” and “Trouble in Mind” are. The band supported the record by doing a tour opening for modern rockers My Morning Jacket that exposed them to a whole new audience.

This led into their 50th anniversary tour that culminated in a performances at Carnegie Hall, the Newport Jazz and Folk Festivals, and the New Orleans Jazz and Heritage Festival with Allen Toussaint, Steve Earle, Trombone Shorty, and others. They also appeared in with the Foo Fighters in the 8 part HBO series “Sonic Highways” in 2014. As they enter their second 50 years, the Preservation Hall Jazz Band still has one foot in the tradition and one foot in the future.