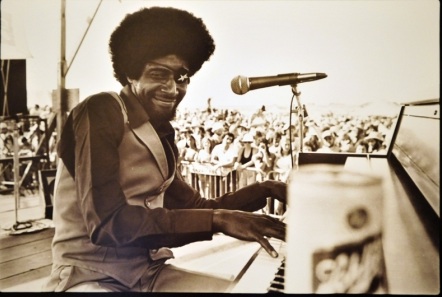 James Booker (1939 – 1983) is widely regarded as one of the most accomplished and inventive pianists to ever emerge from New Orleans during the city’s four-decade history. Known variously as the “Piano Prince of New Orleans,” the “Bayou Maharajah,” and the “Black Liberace,” Booker’s style suggests a uniquely Louisiana hybrid of Jelly Roll Morton and Louis Moreau Gottschalk, plus contemporary material from his own lifetime. Beyond his pianistic prowess, James Booker sang with sly, provocative wit on originals such as “Papa Was A Rascal,” and put his own deeply emotional stamp on standards such as “Let Them Talk.” Booker’s technically complex and ornate keyboard style combined expertise in two genres that are often considered mutually exclusive: classical music, in which he was formally trained, and Afro-Cuban tinged R&B from the streets of New Orleans.

Since Booker divulged little of his personal history, his biography is somewhat difficult to construct. Although born in New Orleans, Booker spent much of his childhood on the nearby Mississippi Gulf Coast. He returned to New Orleans as an adolescent and attended Xavier Prep where, presumably, he acquired the classical technique and dexterity that set him apart from all of his estimable pianistic colleagues. On the R&B and jazz side Booker received some training from the respected New Orleans pianists Edward Frank and Isidore “Tuts” Washington.

Booker’s student and protégé, Harry Connick Jr., gave the following paraphrased explanation of Booker’s unique piano technique to documentary film-maker Lily Keber: “Instead of just playing note-chord, note-chord,” Connick told Keber, “Booker would play one, two, and three… that’s a very Chopin-esque thing to do… that has a very French kind of sound. And then he would add the swing feel to it. That’s what he would do with his left hand. And with his right hand, instead of just playing a melody with single notes, he would put it in octaves, eight notes apart. But that wasn’t enough, he needed some more chords, so he would play the melody with block chords, and that still wasn’t enough. He would do grace notes: a quick note leading to a bigger note; you can do it with two fingers. But when you are doing it with octaves, you only have one finger, in addition to having other notes in the middle and he would roll those sometimes, and turn it into a whole different kind of deal.”

At age 14, as a teen-prodigy colleague of fellow pianists Allen Toussaint and Dr. John, Booker began his recording career. Under name Little Booker, he recorded his first single, “Doin’ The Hambone” and “Thinkin’ About My Baby” for Imperial Records. A surge of creativity energized the New Orleans R&B scene during this time, resulting in an abundance of great records that led to fierce competition for the limelight. In this crowded marketplace Booker only saw one song – his instrumental “Gonzo,” released in 1960 – achieve any significant record sales. For the most part, he worked the low-paying Gulf Coast nightclub circuit, and accompanied more successful musicians on recording sessions. From the mid ‘50s through the mid ‘70s – working in New Orleans, Houston, and around the nation – Booker backed up the diverse likes of Amos Milburn, Joe Tex, Fats Domino, Smiley Lewis, Freddie King, Dave Bartholomew, Aretha Franklin, King Curtis, Earl King, Ringo Starr, Jerry Garcia, Maria Muldaur, John Mayall, T-Bone Walker, the Doobie Brothers, Shirley and Lee, and Junior Parker, among others. In addition he often played with Dr, John, who had ascended from local-level status to national renown.

Booker grew increasingly frustrated in this behind-the-scenes/sideman role, with its one-time payment on records that might sell millions. In addition he suffered from both chronic pain, due to a childhood accident, and episodes of severe mental illness. These convergent demons led Booker into serious substance abuse, which further undermined his career. His behavior grew increasingly eccentric and erratic – as reflected by such stage announcements such as “You have just been entertained by the great Eartha Kitt!” – and he served prison time for possession of drugs.

Booker finally began receiving acclaim in his own right after the release of a well-received solo album entitled Junco Partner in 1976. This led to late-1970s tours of Europe where Booker headlined as a solo artist. He gave dazzling performances at concert halls and major festivals, and recorded some impressive live albums. But in between these gratifying trips abroad, Booker felt sorely unappreciated in New Orleans, where bottom-rung jobs left him barely scraping by. As his addiction and instability worsened, Booker would frequently disappear for lengthy periods, sometimes languishing in jail under false names. He could still summon forth great shows on occasion, but this downward spiral continued until Booker passed away in 1983, at age 43.

Many musicians die before receiving their just due, and James Booker is no exception. Since passing his enormous talent has come to be increasingly appreciated. Many of his recordings have been re-released on CD, on a variety of labels, including Blues & Ragtime, Piano Prince of New Orleans, and Piano Wizard. It should be pointed out, however, that many CD reissues also go out of print, and Booker’s material may not always be easy to find.) In addition, the 2003 album Patchwork: A Tribute to James Booker featured performances by pianists Marcia Ball, Tom McDermott, Henry Butler, Josh Paxton, Larry Sieberth and Sanford Hinderlie, and singer Leigh Harris. Director Lily Keber debuted the 2013 film, Bayou Maharajah (www.bayoumaharajah.com/). Keber’s film continues to garner accolades and is frequently screened overseas. Most significantly, although Booker has been gone for 30 years, his is still revered by New Orleans musicians – both those who knew him, and younger generations who proudly carry his the torch.