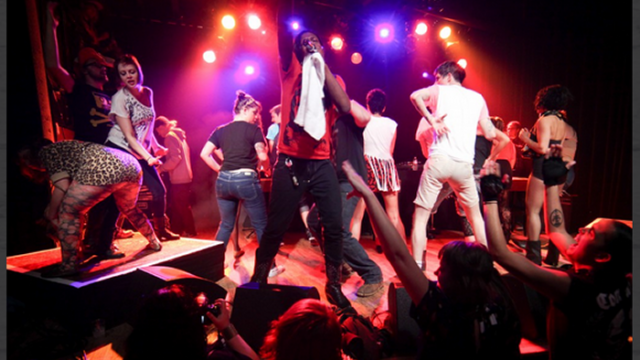 Big Freedia, the Queen Diva, is a singer, rapper and dancer from New Orleans. Most often identified with the LGBTQ-identified “sissy bounce” genre of New Orleans music, Freedia rejects the “sissy bounce” label in favor of the more inclusive “bounce artist.” Over the last decade, “the Queen of Bounce” has helped to further popularize this New-Orleans-centered genre throughout the South and across the globe.

Big Freedia was born Freddie Ross on January 28, 1978 and raised by his mother and stepfather on Josephine Street in uptown New Orleans. His mother instilled a love of singing and records early on, encouraging her son to take piano and serve an integral role in their local Baptist church choir.

Freddie’s wide range of performance skills were already established while still in his teens. As captain of the cheerleading squad at Walter L. Cohen High School and director of his church choir, he was influenced by a wide range of performative styles and sounds. Yet it was hearing New Orleans’s MC T. Tucker and DJ Irv’s groundbreaking track, “Where Dey At” — in the early 1990s — that left him transfixed by bounce, New Orleans’s indigenous high-energy rap genre. By 1998, Freddie was performing as a backup dancer and singer for bounce pioneer, Katey Red. Big Freedia and Katey Red can be seen performing their hit collaboration, “Stupid,” in the New Orleans bounce documentary film, Ya Heard Me, directed by Matt Miller and Stephen Thomas.

In 1999, Freddie was more widely known by her “Freedia” stage name and released her first album, An Ha, Oh Yeah. Working with producer DJ BlaqNMild, who would be Freedia’s primary producer over the coming decade, Freedia released her classic track “Gin ‘N My System” in 2003, which would later be quoted by Lil Wayne and Lil Boosie. The song made Complex Magazine’s list of the 50 best New Orleans rap songs of all time. Freedia’s first studio album, Queen Diva, was released in 2003 and it featured her trademark sound and style: thoughtful lyrics, humor, a central focus on dance, and a powerful delivery.

After being forced to Texas by Hurricane Katrina, Freedia was one of the first artists to begin performing again in New Orleans after the storm. Often performing at multiple events per night, Freedia’s hard work paid off: in the years following Katrina, Freedia became one of the most in demand artists in New Orleans. National exposure increased after a number of key performances, including 2009’s Voodoo Experience music festival (New Orleans). By 2010, Freedia was touring with her then-manager and DJ, Rusty Lazer, and the pop band, Matt and Kim. Features in the Village Voice and the New York Times soon followed.

Freedia’s trajectory after 2010 has been a blur of high-profile work: a central role in Alison Fensterstock and Aubrey Edwards’s Where They At bounce oral history project and two episode appearances on HBO’s Tremé (appearing as herself); the release of the album Big Freedia Hitz: Volume 1, which included her most well-known track, “Azz Everywhere,” and a record deal with Scion A/V, which included her hit track, “Excuse” (2011); a national television appearance on Jimmy Kimmel Live! then coverage on FADER TV and Pitchfork TV. Finally, her own reality show, Big Freedia: Queen of Bounce, debuted on Fuse TV in October 2013.

A much beloved figure in New Orleans, Freedia continues to reinvent herself as an artist, singer, dancer and television personality, with a memoir and a musical about her life and art currently in production.