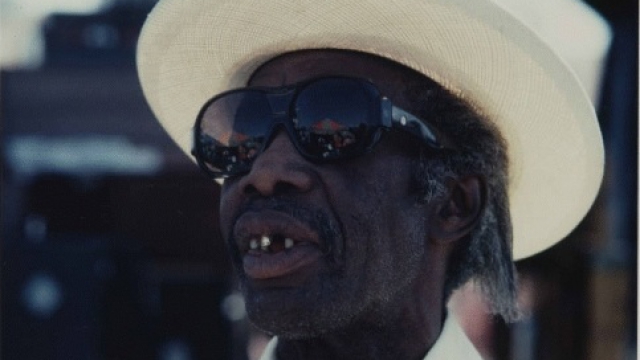 Henry Roeland Byrd (December 19, 1918-January 30, 1980), known professionally as Professor Longhair – and in New Orleans street-lore simply as Fess – was an R&B pianist whose style drew heavily on Afro-Caribbean rhythms. Byrd’s career started in the late 1940s, and from then through the early ‘60s he recorded several of the city’s perennially favorite celebratory anthems, including “Tipitina,” “Big Chief,” and “Mardi Gras In New Orleans.”

Byrd first performed in public as a tap dancer. He went on to play drums, briefly took up the guitar, and then settled on piano, informally schooled in part by the noted New Orleans keyboardist Isidore “Tuts” Washington. Byrd also learned from such pianists such as Archibald (Leon T. Gross) and Kid Stormy Weather, in the course of hanging out at a strip of clubs, now demolished, that once stood on South Rampart Street. Byrd acquired his performance alias at some point in the late 1940s, an appellation reflected the broader tradition of New Orleans “piano professors” that began with the advent of jazz. The “Longhair” part of his moniker can, legend has it, be traced to the owner of the Caledonia Club, in New Orleans’ Tremé district. The reason, as Byrd explained succinctly if also somewhat cryptically, was because “we had long hair.” Fittingly, Longhair often gave his band capricious names including “The Shuffling Hungarians,” and years later, “The Blues Scholars.”

Byrd used various pseudonyms when recording over the years, primarily to avoid detection for violating exclusive contracts when he did sessions for other companies. This was a common practice in an era when recording artists often had trouble collecting royalties from sales and thus would jump from label to label in search of fresh advance payments. As a result, attempting to compile a Professor Longhair discography reveals a complex tangle of pseudonyms, and multiple renditions of the same songs that sometimes thinly disguised with different titles, compounding the confusion. Longhair’s oeuvre – including the above-mentioned songs as well as “Bald Head,” “In The Night,” and “Ball The Wall” – greatly influenced the next generation of New Orleans R&B pianists, such as Allen Toussaint, Dr. John (Mac Rebennack), Art Neville, and Huey “Piano” Smith. As Rebennack put it, “Professor Longhair was the guardian angel of the roots of New Orleans music. He was a one-of-a-kind musician and man, and he defined a certain style of rhumba-boogie funk that was New Orleans R&B from the late 1940s all the way through to his death in 1980. All New Orleans pianists today owe Fess. He was the guru, godfather, and spiritual root doctor of all that came after him.”

The “rhumba-boogie funk” that Rebennack mentions is analogous to what Jelly Roll Morton described as “the Latin tinge.” It underscores New Orleans’ status as the northern frontier of Caribbean culture, as well as the city’s history of strong connections with both Cuba and Haiti. In addition, Longhair played in an idiosyncratic manner that differed from conventional structure, by dropping or adding beats at will. This approach is known among musicians as “jumping time, ” or “breaking time.”

Byrd’s records brought him little money, restricting him to performing on a low-level regional circuit. By the 1960s, he mainly supported himself as a professional gambler, and when winning card games didn’t pay the bills he did manual labor. By the late ‘60s many people on the New Orleans music scene thought that Professor Longhair had either left town or died. Then in 1970 a coterie of young music enthusiasts, including Hudson Marquez, and Quint Davis, a co-founder of the New Orleans Jazz & Heritage Festival, found Longhair working as a janitor in a record shop. Although his health was shaky and his morale was low, he still played and sang in peak form.

Quint Davis booked Professor Longhair on the 1971 New Orleans Jazz & Heritage Festival, and also worked as his manager for the next five years. Longhair recorded again, after a long absence, playing better venues in America, and performed for the first time in Europe. His personal career resurgence coincided with larger cultural renaissance that swept New Orleans in the late 1970s, to the great benefit of musicians who played such local genres as rhythm and blues and traditional jazz. (Southwestern Louisiana experienced parallel developments with renewed interest in Cajun music and zydeco.) In this climate of awareness and respect, older musicians who had been overlooked came to venerated, and beloved. 1977 saw the founding of the nightclub Tipitina’s, named, of course, for a Professor Longhair song. “Tip’s” became the epicenter of appreciation for Byrd and many other New Orleans musicians, and he played there often.

In 1979, Byrd signed with a Chicago-based company, Alligator Records, and cut his first full album ever, entitled Crawfish Fiesta. (His early sessions had yielded only a few songs at a time, which were sporadically released as singles and then occasionally reissued on compilations.) Sadly, Professor Longhair died on January 30, 1980, just one day before the album’s release. His posthumous accolades include a Grammy award in 1987 for a reissue album, and induction into the Rock and Roll Hall of Fame in 1992. A cast-iron bust of Professor Longhair’s likeness stands in the entrance to Tipitina’s, symbolizing Professor Longhair’s perennial stature in New Orleans music and culture.