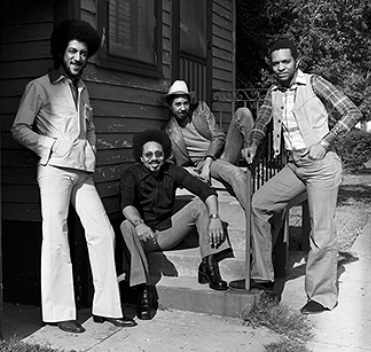 The Meters, during their dozen or so years of existence (circa 1965 – 1977), helped define both the New Orleans R&B sound of that era and the nascent national trend that would come to be known as funk. The group was founded by keyboardist and singer Art Neville, who already had an impressive resumé. In 1954, Neville sang lead on the Hawketts’ “Mardi Gras Mambo” – an Afro-Caribbean romp in the Professor Longhair tradition that remains a beloved Carnival-season anthem in New Orleans sixty years later. Neville also made brilliant R&B records as a solo artist, including “Cha-Dooky-Doo,” (1958) and “All These Things” (1962), the latter is a timeless regional favorite, especially among slow-dancers.

In the mid-1960s – there are varying accounts as to the precise time frame and chronology – Neville began working with bassist and back-up singer George Porter Jr , drummer Joseph “Zigaboo” Modeliste and guitarist Leo Nocentelli. Each was a master of his respective instrument. The group had sequential house-band gigs at two venues – The Night Cap (uptown New Orleans on Washington Avenue) and the Ivanhoe in the French Quarter, which brought them to the attention of Allen Toussaint. Toussaint – a noted pianist, songwriter, arranger, and singer – was also one of New Orleans’ up and coming R&B producers. Toussaint began hiring Neville and his associates as his A-list band of studio musicians. They played on such classics as Lee Dorsey’s “Yes We Can” (1970) and “Who’s Gonna Help Brother Get Further” (1970). Porter Jr said, “We were never actually in the studio with Lee, though. Back then we used to cut all kinds of tracks for Allen, sometimes for days on end. We didn’t always know the name of them or who was going to sing on them. Lee would come in and do his vocals later.” The framework that this band, as yet unofficially named, created for singers such as Dorsey was deceptively simple and uncluttered, focusing the listeners’ attention squarely on the lead singer.

It was around 1968 that the foursome decided to call themselves The Meters, a name that underscored their precise approach to rhythm. In 1969 and 1970, four of their songs produced by Allen Toussaint – “Sophisticated Cissy,” “Cissy Strut,” “Look-Ka Py Py” and “Chicken Strut” charted nationally as singles. These songs were all instrumentals and bore some conceptual resemblance to the work of the Memphis-based group Booker T and the MGs, especially in terms of Neville’s approach to the Hammond B-3 organ. But the Meters differed distinctly in terms of performing some songs with vocals and by drawing on New Orleans’ venerable second-line rhythmic tradition with a loose-yet-tight, syncopated, push-and-pull approach. Instead of rigidly repeating the same exact pattern in every measure, they would subtly shift emphasis from bar to bar, leaving brief but dramatic empty spaces while teasing and toying with the tempo, but always resolving such digressions precisely on time. The band extended a musical line that goes straight back to West Africa, where the use of seemingly clashing polyrhythms is cohesively unified by the use of a steady timeline. In a similar yet contemporary vein, the Meters’ music represented a hybrid of American R&B/soul music, Jamaican ska and reggae. South Louisiana has long been regarded as the northern frontier of Caribbean culture and the Meters’ work underscores that connection.

The Meters’ emergence tied in with and contributed to the emergence of the bass-heavy, syncopated genre known as funk. Other pioneers in popularizing this trend included James Brown – as heard on his 1965 hit “Papa’s Got A Brand New Bag,” the Bay Area band Tower of Power, the Ohio Players, Sly and the Family Stone, and Parliament/Funkadelic, among others. Perhaps the first hit to feature this term in its title was “Funky Broadway” by Dyke and the Blazers, released in 1967.

Between 1969 and 1977, the Meters recorded seven albums, and scored a regional hit in the New Orleans area with “Hey Pocky A-Way,” in 1974. This adaptation of Mardi Gras Indian material remains a long-standing New Orleans favorite. The Meters became a quintet with the addition of Art’s brother Cyril as a lead vocalist and percussionist. While the Meters’ albums were deservedly acclaimed by music journalists and fellow musicians, none sold very well. The group languished in the curious state of career limbo that often comes with being a “critics’ darling.” The Meters continued to help Toussaint craft hits for other artists as accompanists on material including Dr. John’s “Right Place, Wrong Time” (1973) and his brilliant album Dessitively Bonaroo (1974); LaBelle’s “Lady Marmalade” (1975); and Paul McCartney’s “Listen To What The Man Said,” also in 1975. The band also played on one of the first and best, contemporary commercial interpretations of Mardi Gras Indian music, The Wild Tchoupitoulas album, released in 1976. That year and the one preceding also saw the Meters open tours for the Rolling Stones in the U.S. and Europe. Shortly after appearing on national television on Saturday Night Live in 1977, the Meters broke up.

Since then, all four members have remained active in music. Various configurations of the group with new personnel have performed as the Meters, the funky Meters and the Original Meters. The founding foursome has returned for several reunions during the new millennium. Their most recent appearance came in 2012 with a performance-in-entirety of Dessitively Bonnaroo with Dr. John and Toussaint at the Bonnaroo Festival in Tennessee. At this writing, the influence and seminal legacy of the Meters remains strong both in New Orleans and among musical cognoscenti the world over – both as a group and the highly respected talent of each individual member.

Songs for The Meters