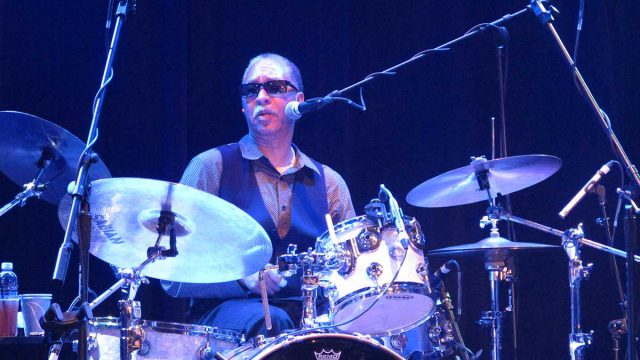 Joseph “Zigaboo” Modeliste (born December 28, 1948) is a New Orleans-born drummer best known as one of the founders of The Meters. His innovative drumming styles and patterns are regarded as foundational to New Orleans music and funk. Modeliste’s rhythms have been sampled by rappers since the beginnings of hip hop. He has also played with many other artists from Keith Richards to Dr. John to Lee Dorsey. He appeared on the cover of Modern Drummer and made Total Drumset’s list of “Top 100 Most Influential Drummers Ever.”

Modeliste was born in the 13th Ward in uptown New Orleans and started playing drums at the age of 10. He played in the marching band in high school when the Meters formed in 1965 with vocalist/keyboardist Art Neville, bassist George Porter Jr., and guitarist Leo Nocentelli. The band got its start in The Nitecap, an Uptown club on Carondelet St. and Louisiana Ave. backing up several Neville brothers. When the band was hired for a gig at the Ivanhoe in the French Quarter, only the instrumentalists were hired. Yet since the Ivanhoe schedule required playing multiple sets each night, 6 nights per week, and consequently, the band became very tight. Allen Toussaint heard them and hired them to be the house band for his SeaSaint Studios and Sansu Enterprises.

The first singles by the Meters were released in 1969 and became instant classics: “Cissy Strut” and “Sophisticated Cissy” cracked the Top 10 on the rhythm-and-blues charts, while that “Look-Ka-Py-Py” and “Chicken Strut” both peaked at number 11 in 1970. Most of their music came from improvised jams that they recorded. The Meters’ music was stripped down and minimalist yet marked by an intricate ensemble able to bring simple parts together into a rich, textured sound. Modeliste’s contribution — his technique – came through his use of space. His rhythms fell in unexpected places with gaps that sealed in the funk and were unique unto him. He often played on just one part of his drum kit for extended sections, allowing more space for the instrumentalists and giving the Meters more space.

The Meters put out many more singles and albums in the 1970s including Fiyo On the Bayou, Trick Bag, and their masterpiece, Rejunvenation. They worked as the backing band for Dr. John (“Right Place Wrong Time” and “Desitively Bonnaroo”), Lee Dorsey (“Everything I Do Gohn Be Funky”), Robert Palmer (“Sneakin’ Sally Through the Alley”), Earl King (“Street Parade”), and The Wild Tchoupitoulas. Modeliste-powered polyrhythms and loosely-tight beats are the foundation upon which the music soars. The reputation of the Meters spiked when the band opened for the Rolling Stones on tours in 1975 and 1976.

The Meters left Toussaint and Sansu in 1976 then split up in 1978 after internal dissension concerning lack of royalties and control of their music. Modeliste toured with The New Barbarians in the late 1970s — fronted by Keith Richards and Ronnie Wood – and then left the music business for a while. In 1984, Modeliste started litigation against Toussaint and his partner Marshall Sehorn over non-payment of royalties for their session work, compositions, and recordings, and these negotiations continue to this day.

Many hiphop artists have sampled The Meters — and Modeliste’s rhythms in particular — including NWA, Ice-Cube, The Beastie Boys, De La Soul, Queen Latifah, Ice-T, Run-DMC, and Salt-N-Pepa. His rhythms powered Amerie’s “1 Thing” to number 1 on the rhythm-and-blues charts and the song was nominated for a Grammy. In 2014, Eminem sampled Modeliste’s drumming for his Billboard #1 BMI Award-winning single “Bezerk.” His music has appeared in the movies Jackie Brown, Drum Line, 8 Mile, and Hancock.

He released his first solo record in 2000 (Zigaboo.com) and received good reviews, and in 2004 he put out “I’m On The Right Track.” In 2012, Modeliste released New Life, the most New Orleansy music he’d done since leaving the Meters. He continues to do workshops and master classes, with a distilled version of his style available in his instructional DVD, The Originator of New Orleans Funky Drumming.