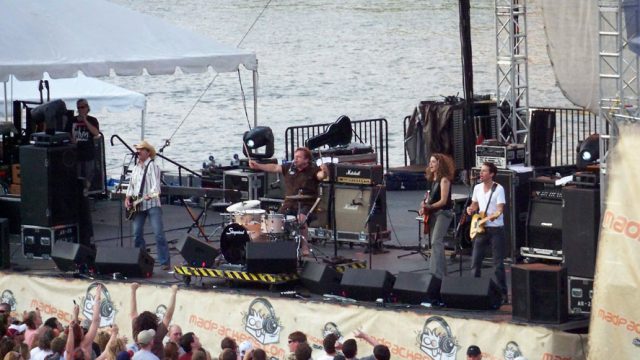 The band name “Cowboy Mouth” usually means “One with a loud and raucous voice.” The nucleus of the band formed in the 1990s, and they have become a powerhouse live act whose performances have been likened to “a religious experience.”

Some of their most popular songs include “Love Of My Life,” “Everybody Loves Jill” (where the audience throws red spoons on stage), “Easy,” “Disconnected,” “How Do You Tell Someone,” and “Jenny Says.” They also perform a version of “Born to Run” on the Light of Day tribute album to Bruce Springsteen, a version of “The Pusher” on the soundtrack to Half Baked, and several of their own songs on the soundtrack to the 1995 film The Underneath (two of which they perform onscreen in the film). Their single “This Much Fun” from their 2006 album “Voodoo Shoppe” is featured in the trailer for the Disney animated feature Meet the Robinsons.

They maintain a very active touring schedule, primarily through the United States. The album Voodoo Shoppe is in part a tribute to city of New Orleans, Louisiana in the wake of the devastation of Hurricane Katrina — in particular, the tracks “Home,” a defiant vow to rebuild the city, and “The Avenue,” an emotional plea for the continued vibrance of the city. “The Avenue” features the lyrics “Because the marching bands will roll/I’ll find my city in my soul/Because I plan on growing old on the avenue,” a reference to watching Mardi Gras parades on New Orleans’ famed St. Charles Avenue. A portion of the album was recorded with producer Mitch Allan and features engineers Stewart Cararas and Danny Kadar at their studio Paradigm Park Studios in New Orleans. Unfortunately just seven months after the record’s completion the studio suffered the wrath of Hurricane Katrina. They performed “The Avenue” on Mardi Gras Day 2006 live on The Ellen DeGeneres Show. The album also features the song “Joe Strummer,” a semi-tribute to the late Clash frontman. The band released its first full length live DVD, The Name of the Band Is Cowboy Mouth, on November 20, 2007. The DVD, which was recorded in front of a packed house at the Roxy On Sunset in Hollywood, CA during the summer of 2007, features much of the band’s classic material like “Light it on Fire” as well as some songs to be released on the band’s new album, Fearless, in September 2008. Among the new songs of the DVD set, “Kelly Ripa” was released in a very different studio version as a single on iTunes in early March 2008 followed by an appearance and performance on the Live with Regis and Kelly television show on March 13, 2008.

On May 14, 2011, during a performance at Bon Ton Louisianne in Houston, Texas, Cowboy Mouth was inducted into The Louisiana Music Hall Of Fame.