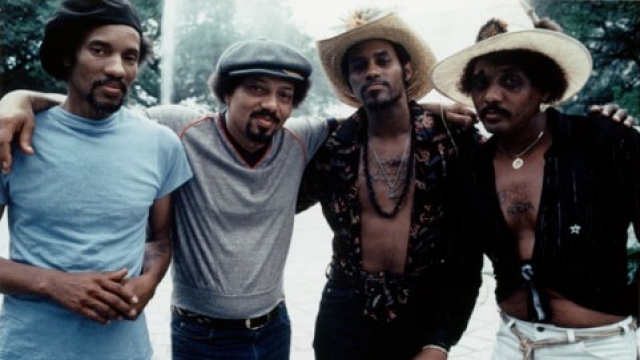 From 1977 to 2013, the Neville brothers banded together to form one of the best-known and most musically adventurous groups to ever emerge from the New Orleans R&B scene. In addition to rhythm & blues, the music made by Art (born 1937), Charles (born 1938), Aaron (born 1941) and Cyril (born 1948) seamlessly overlapped, to a considerable degree, with Mardi Gras Indian chants and funk. Jazz, gospel, pop/rock and doo-wop factored in as well.

The brothers grew up surrounded by music. They learned Mardi Gras Indian chants from their uncle, George Landry, who was also known Big Chief Jolly of the Wild Tchoupitoulas tribe. The great R&B singer Smiley Lewis was a close family friend. A combination of records, radio, and live performances by the likes of Professor Longhair, Fats Domino, Tommy Ridgley and many others made New Orleans R&B a ubiquitous presence. The brothers grew up and sang with other young R&B musicians who would become professionals. Gospel music was close at hand at Sunlight Baptist Church when the family lived in uptown New Orleans on Valence Street. During their years as residents of the Calliope housing development across town, gospel music literally poured out from the nearby Two Wing Temple. The presiding pastor, Elder Utah Smith, would plug his electric guitar into an amplifier with an extra-long cord and when the spirit moved him, Smith would play outside in the street.

Art Neville, the eldest brother, came to the family band with an already impressive resumé as an accomplished keyboardist and an evocative crooner. In 1954, still a teenager, he sang lead on the Hawketts’ “Mardi Gras Mambo,” an Afro-Caribbean romp, a la Professor Longhair. Sixty years later, at this writing, this song remains a beloved Carnival-season anthem in New Orleans. Neville also made brilliant R&B records as a solo artist, including “Cha-Dooky-Doo,” (1958) and “All These Things” (1962); the latter is a timeless slow-dance favorite. In the late ‘60s Art Neville founded the seminal funk band The Meters, resulting in such instrumental hits as “Cissy Strut” (1969) and “Look-ka Py Py” (1970), as well as “Hey Pocky A-Way” (1974), a modern adaptation of Mardi Gras Indian chants. The Meters also worked as A-list studio musicians for the famed New Orleans producer Allen Toussaint. The group played on hits including Dr. John’s “Right Place, Wrong Time” and Paul McCartney’s “Listen To What The Man Said,” among many others. Charles Neville, a saxophonist and veteran of the blues and R&B circuit – including the last days of the venerable Rabbit’s Foot Minstrels – also brought the band a jazz sensibility and a focus on Eastern philosophy. Charles said, “the spiritual side of the Neville Brothers’ music is the expression of the God energy on each of us. When we combine our individual energy to do what we do together, it turns into something bigger, and that’s what we refer to in album titles like Family Groove.”
Aaron Neville came to the group with an established reputation as a deeply affecting singer. Aaron’s distinctive voice and vocal style, simultaneously sensual and ethereal, employed an understated sense of phrasing that paradoxically soared to dramatic, quavering, falsetto flourishes. Aaron’s regional hits included “Let’s Live” (1961) and “Wrong Number” (1963). “Tell It Like Is,” released in 1966, hit number-one on the national R&B charts and number-two on the national pop charts in 1967. When Aaron teamed up with his brothers in 1977, his career had receded to the local-artist level.

Cyril, the youngest brother, also an alumnus of the Meters, contributed fiery vocals and percussion work as well as strong political views. The latter were expressed on such original songs as “Sister Rosa,” a tribute to civil rights pioneer Rosa Parks.
Cyril said, “I was seven years old when Sister Rosa Parks refused to give up her seat, which started the bus boycott in Montgomery, Alabama [1955 – ’56.]… I was in the Civil Rights Movement. I was a Black Panther… One of my driving forces in life is to dispel all the negative myths that are perpetuated about black males.”

Art, in summarizing each sibling’s contributions, said, “We are all brothers, but we all think totally differently, musically and otherwise. We all show respect for what we do individually. Charles is the jazz man. Cyril is the defiant one. Aaron has the sweet honey voice, the angel sound. I play the funk. When we put it all together, there’s a powerful force that’s just beyond my comprehension.”

Starting with the debut album, The Neville Brothers (1978), the band recorded 15 subsequent albums, including several that captured their spirited live performances. The Neville Brothers became “critics’ darlings” among music journalists, helping to inspire a 1980s revival of interest in New Orleans music, from which, in circular fashion, they also benefitted. For years, the Neville Brothers played the closing set on the last day of the New Orleans Jazz & Heritage Festival, underscoring the profound respect accorded to one of the city’s great musical dynasties. They toured the world peripatetically and recorded prolifically, working with a variety of producers, most notably Daniel Lanois. That collaboration on an album entitled Yellow Moon, won the group a Grammy award for a song entitled “Healing Chant,” as the Best Pop Instrumental Performance of 1989. As Charles said, “Lanois got more of our spirit and emotional content on record than anyone before or since. He had the smarts not to dominate – as many producers do – but elicit the magic burning at the bottom of our souls.”

The Neville Brothers continued to record into the new millennium. However, despite some first-rate albums and continued popularity as performers, only two of their albums – Yellow Moon and Brother’s Keeper (1990) sold well by major-label standards. It has been theorized that the Neville Brothers might have experienced more commercial success had their music been aimed at African-American audiences and radio, rather than at a rock-oriented demographic that was predominately white. Whatever the case, the brothers kept a grueling pace of touring and recording. Their last album of new material, Walkin’ In The Shadow of Life was released in 2004 and since then, many reissue albums have followed. Some of these are legitimate, while others have dubious legal provenance and are known in music-business parlance, as “bootlegs.”

Meanwhile, Aaron’s solo career reignited. In 1989 and 1990, he won Grammy awards for Best Pop Performance By A Duo or Group With Vocal for duets with Linda Ronstadt on “Don’t Know Much,” followed by “All My Life.” A longtime devotee of country music, Neville’s 1994 duet with Trisha Yearwood on the Patsy Cline classic “I Fall To Pieces” won a Grammy as that year’s Best Country Vocal Collaboration. Since 1985, Aaron has also recorded numerous new albums, covering such diverse ground as country, standards, gospel, and, most recently, doo-wop, on My True Story (2013). “Greatest hits” offerings continue to glut the market and again, some of these appear to be bootlegs.

Aaron is now performing exclusively as a solo artist. At age 72, he explained, he did not have the stamina to lead his own career and continue in the family band. Art, Charles and Cyril now perform under the name “the Nevilles.” In whatever configuration they appear, the Neville brothers remain beloved and deeply respected, worldwide, for their major contributions to New Orleans music.

Spera, Keith. “Aaron Neville to fly solo at 2013 New Orleans Jazz Fest; his brothers to perform without him,” article in the New Orleans Times-Picayune. January 23, 2013. http://www.nola.com/jazzfest/index.ssf/2013/01/aaron_neville_to_fly_solo_at_2.html

Songs for The Neville Brothers