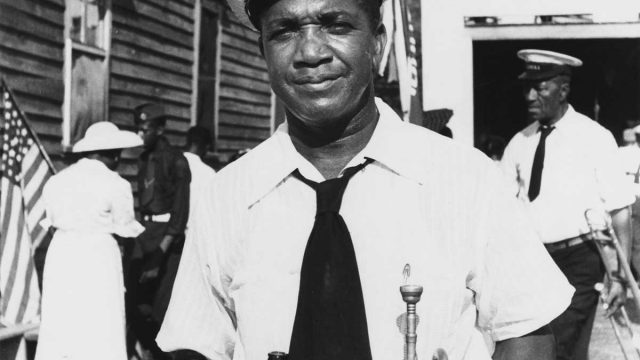 Born in New Orleans as George Cola, trumpeter George “Kid Sheik” Colar (1908-1996) began working professionally in 1925 after taking lessons from Wooden Joe Nicholas. In the 1930s he was in Kid Rena’s marching band. During World War II he spent two years in the U.S. Air Force Music School. In 1949 Sheik was working with George Lewis at Manny’s Tavern. He played with the Eureka Brass Band from 1952, and later with Dejan’s Olympia Brass Band into the 1990s. He began recording with his own bands in 1961, toured Europe with drummer Barry Martyn in 1963 and with John Handy in 1966. During the 1970s he appeared regularly at Preservation Hall, and in 1985 he married the pianist Sadie Goodson, the older sister of pianist Billie Pierce.