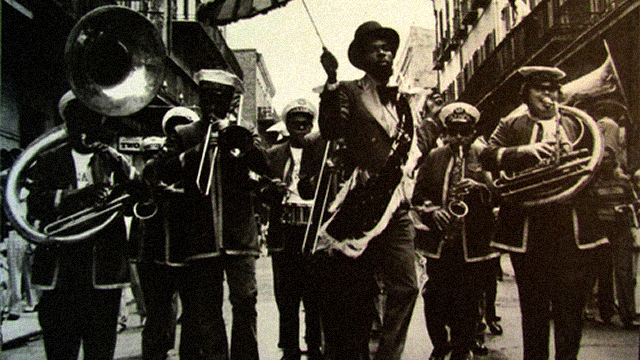 The first “Olympia Brass Band” was active from the late 19th century to around World War I. The most famous member was Freddie Keppard.

In 1958, saxophonist Harold Dejan, leader of the 2nd unit of the Eureka Brass Band, split off to form the current Olympia, reviving the historic name.

The band had a notable part in the 1973 James Bond movie Live and Let Die where they lead a funeral march for a freshly assassinated victim. Trumpeter Alvin Alcorn plays the knife wielding “baby faced killer.”

In addition to playing for parades and parties, the band had a weekly gig at Preservation Hall on Sunday nights for many years. The band also toured Europe on numerous occasions and also toured Africa for the U. S. State Department. The band did a BBC radio broadcast for Queen Elizabeth’s 25th wedding anniversary in 1972 while they were in London, and also played for Pope John Paul II on his visit to New Orleans.

The Olympia Brass Band was included with other stellar musicians from Louisiana, on the Southern Stars poster created by Dianna Chenevert to promote them and historically document their contribution to the music industry. On October 12, 1983, USA Today reporter Miles White highlighted the poster which provided additional nationwide attention. In 1986, Chenevert booked the “Olympia Brass Band” for a month long engagement in Israel at the night club El Hamm. According to the Times-Picayune front page article on September 4, it was Olympia’s first trip to Israel and they arrived at the Tel Aviv airport wearing their traditional band outfits (red blazers, black pants and white hats). The Israeli immigration officials detained Olympia at customs, mistaking them as Black Hebrews, a sect at odds with the government. Band leader Herold Dejan saw the brief delay and international press coverage as good advertising, and made the comment “everything’s lovely!”

Although the band left numerous recordings, none is more prevalent then their recording of “The Westlawn Funeral Dirge” which featured Emanuel Paul on the tenor saxophone.

The Olympia Brass Band is profiled in the book, The Great Olympia Band by the late English writer Mick Burns, and Keeping the Beat on the Street: The New Orleans Brass Band Renaissance also by Mick Burns.