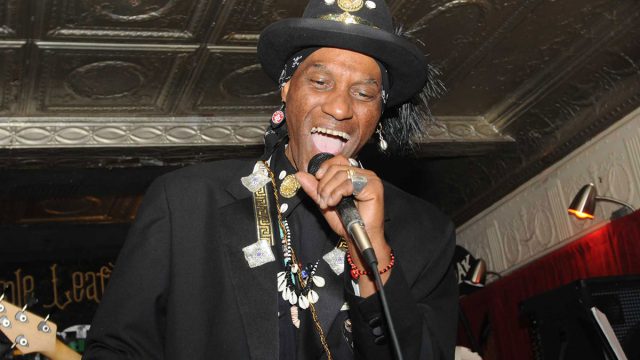 Cyril Garrett Neville (born in New Orleans, Louisiana, October 10, 1948), is a percussionist and vocalist who first came to prominence as a member of his brother Art Neville’s funky New Orleans-based band, The Meters. He joined Art in the Neville Brothers band upon the dissolution of the Meters.

He has appeared on recordings by Bob Dylan, Robbie Robertson, Edie Brickell, Willie Nelson, Dr. John and The New Orleans Social Club among others.

Neville wrote an article for the December 16, 2005 edition of CounterPunch, titled “Why I’m Not Going Back To New Orleans” and was featured in the 2006 film, New Orleans Music in Exile. After Katrina he moved to Austin, Texas but currently lives in Slidell, Louisiana.

Soul Rebels Brass Band featured Neville as a special guest on their Rounder Records debut record, Unlock Your Mind, released on January 31, 2012. The Soul Rebels’ name was conceived by Neville at the New Orleans venue Tipitina’s, where the band was opening.

In 2005 Neville joined up with Tab Benoit for the Voice of the Wetlands Allstars to bring awareness to Louisiana’s rapid loss of wetlands along the Gulf Coast. The band also features Waylon Thbodeaux, Johnny Sansone, Anders Osborne, Big Chief Monk Boudreaux, George Porter Jr, Johnny Vidacovich, and Dr. John. The band has become a main feature at the annual New Orleans Jazz and Heritage Festival in New Orleans, LA.

In 2010 Neville joined New Orleans hipster funk band Galactic. He put aside his solo career to tour internationally with the band.