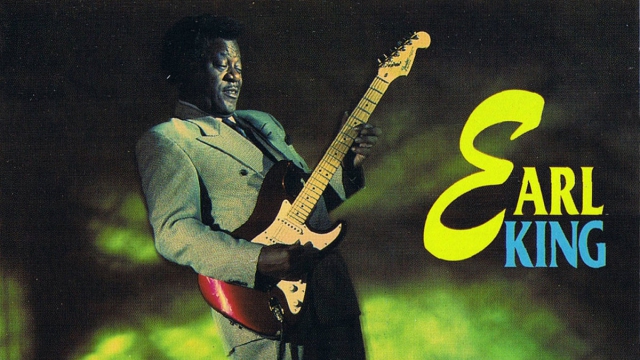 Earl King (2/7/34 – 4/17/03) was one of the most talented and beloved songwriters and performers in New Orleans and the rest of the country. His songs have been recorded by artists from Fats Domino to Stevie Ray Vaughn, Robert Palmer to Professor Longhair. Earl King was on the forefront of rock’n’roll and rhythm and blues in the ’50s and ’60s while recording for Ace and Imperial records. Two tunes written by King are Carnival standards: Big Chief (as recorded by Professor Longhair) and Street Parade.

They are the themes of Fat Tuesday parades and Mardi Gras Indians and Pre-Lenten revelers everywhere. His whimsical humor and street-talk lyrics combine inventive rhythms and guitar-playing to make terrific songs. He was a conversationalist and raconteur of extraordinary wit and character. His later recordings on the Blacktop Label, although not as well known, are as good, meaningful, and lively as any of his classic recordings.

1) – Earl King moved to Imperial Records in 1959 after having been on Ace Records. He explains why and then he and producer Dave Bartholomew talk about how he recorded some of his most famous and beloved compositions.

2) – Here, Earl King speaks about his live performances. Cosimo Matassa, Irma Thomas, and Deacon John testify about how electric and unpredictable King could be onstage

3) Earl started recording again for Blacktop Records in 1986. Journalist Jeff Hannusch talks about Earl’s methods of working before King and Blacktop Records owner Hammond Scott describe how King got with Blacktop and the records that resulted.