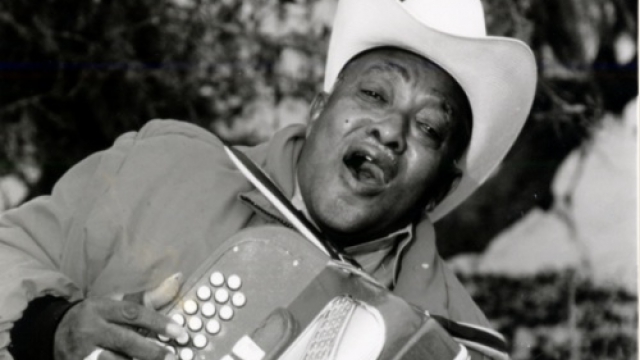 Zydeco (pronounced ZY-duh-coe) is the exuberant dance music of Creoles in southwest Louisiana. It is a rich hybrid, based on core Afro-Caribbean rhythms and song forms such as juré singing, African-American blues and rhythm & blues, and Cajun music. (The term zydeco typically denotes black bands, while Cajun usually denotes white musicians. Both genres have much in common, in terms of instrumentation and repertoire, including some songs that can be traced back to medieval France.)

A variety of other musical genres have interacted with zydeco, including country music, rock, reggae, the Cajun-zydeco variant of R&B known as “swamp pop,” and, for the past quarter-century, rap music and hip-hop. Traditionally, zydeco is sung in French. It is not intended for passive, analytical listening. Clifton Chenier, the universally acknowledged “king” of zydeco stated, “If you can’t dance to zydeco, you can’t dance, period.” Chenier backed up this statement by routinely playing for four hours straight without a break, maintaining a full dance floor.

Zydeco’s signature instrument is the accordion and two distinct types are employed. These are chromatic piano-model accordions, which encompass half-step “blue note” intervals – the flatted third, fifth, and seventh in a scale – and diatonic models, which only play whole-note intervals. Diatonic accordions may be built to be played in one, two, or three different keys and are classified accordingly as single-row, double-row, or triple-row models. Accordionists who can only play in one key all one night must have other charms to keep an audience entertained, and their secret is providing a great groove for dancers. Additional instrumentation in zydeco bands includes electric bass, electric guitar, saxophone (and sometimes a horn section), drums, and a distinctive percussive instrument called the frottoir, or rub board. Frottoirs are made of corrugated metal and are worn hanging from the shoulders like a backless vest. They are played by scraping the corrugated ridges with spoons or bottle-openers. The fiddle, once prominent in early zydeco, has largely disappeared.

Zydeco is often explained as a phonetic elision of the French phrase, “les haricots” (pronounced lay-ZAH-ree-coe). This comes from the phrase “les haricots sont pas sales,” which appears frequently in Creole folk music. It was first documented on a song entitled, “J’ai Fait Tout le Tour du Pays,” recorded for the Library of Congress by folklorist Alan Lomax in 1934. Literally translated, “the snap beans are not salty,” “les haricots sont pas salés” is also a metaphor for times so difficult that people cannot afford to season their food. Heard in many traditional songs, this phrase was shortened as it also acquired several separate, yet closely related meanings: the title of a song, “Zydeco sont pas sales;” the title of the musical genre represented by that song; the social gatherings where such music was played; and the dance steps and the act of dancing that such music inspired. These overlapping definitions can be perplexing, and journalist Susan Orlean astutely pointed out that “[i]n theory, this meant you could zydeco to zydeco at the zydeco.”
Zydeco was first used in 1950 as a stand-alone word on a record on Clarence Garlow’s “Bon Ton Toula.” – “You want to have fun, now you got go/Way out in the country to the zydeco.” Heretofore, the music that constituted zydeco had been known as “ba-zar, ” or “la-la,” and it was retroactively dubbed “la musique Creole.” In the years after “Bon Ton Roula” became a hit, however, zydeco became the generally accepted name for Creole dance music. Its phoneticized spelling was somewhat hard to divine, since the word came from oral tradition, in a language that was rarely written down. The current spelling came to be viewed as the norm – it appears in dictionaries – although debate has continued. In 1984, the noted Québecois filmmaker André Gladu released a documentary on Creole dance music that was pointedly entitled Zarico, which Gladu felt was more faithful to the word’s French roots. There are also theories that the word is of African origin, rather than French.

Accordionists such as Clifton Chenier and Boozoo Chavis made the first zydeco recordings in the mid-1950s, and Chavis had a hit in 1955 with “Paper In My Shoe.” Chenier, a far more sophisticated musician, recorded original material that resembled the era’s cutting edge R&B. He also took R&B hits by the likes of Louis Jordan and “zydeco-ized” them with French vocals and accordion accompaniment. This approach did not bring Chenier commercial success on the national R&B scene, even though he was signed to the same record label as Little Richard. By the end of the ‘50s, zydeco and Cajun music hit a low ebb in their South Louisiana communities. French-language accordion music was scorned as ‘hick’ and passé, and people were discouraged from speaking Louisiana French dialects.

Fortunately, the ‘60s folk revival brought renewed interest in a broad spectrum of traditional, indigenous music. Chenier and other artists began playing the folk circuit, both in America and overseas, to receptive if somewhat puzzled audiences who did not always dance. By the late ‘60s, zydeco experienced another level of crossover appeal to white audiences, when Chenier and associates brought their music to hippie-era venues. Meanwhile, a new atmosphere of pride, appreciation, and acceptance for regional culture was evolving in South Louisiana. In 1982, accordionist Queen Ida became the first zydeco artist to win a Grammy award, followed two years later by Chenier. In 1987, The Big Easy, a movie with a Louisiana setting and soundtrack, raised the national consciousness regarding Louisiana music. Buckwheat Zydeco signed a major-label record deal, placing him and his band in opening-act slots on stadium tours by major rock artists such as Eric Clapton and U2.

Zydeco was used in national advertising campaigns for a variety of products, however, this fad faded. Despite ups and downs, the genre has retained n ational visibility and respect, and has not receded into regional obscurity: bandleaders such as Geno Delafose, Nathan Williams and Jeffery Broussard balance a traditional sound with contemporary sources; Terrance Simien has crossover appeal with rock audiences; and Cupid blends zydeco with hip-hop. The viability of annual events and lively music cements its irresistible power to make people dance.