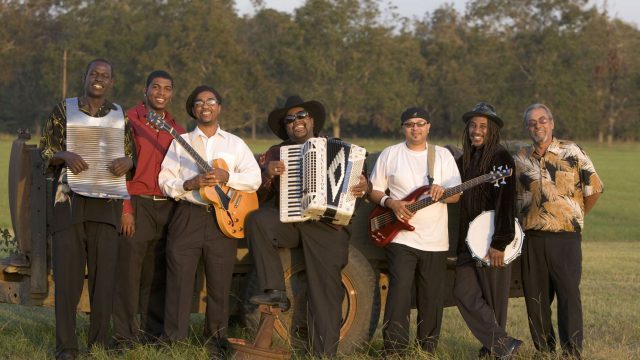 Nathan Williams plays zydeco, the fast and furious accordion-driven dance music of the Creole people of South Louisiana, a relatively modern style that emerged after the Second World War. With its trademark rubboard percussion, electric guitars and R&B influences, zydeco is distinct from the fiddle-driven music of neighboring Cajuns.

Zydeco is now a familiar sound to many, heard in commercials for mainstream companies such as Burger King and Toyota, and there are pockets of devoted zydeco dancers throughout the world. Yet, after its flush of national popularity in the late 1980s, which saw soaring sales of both zydeco and Cajun CDs, zydeco has in many ways faded from popular consciousness, retreating to the South Louisiana dance halls and festival gigs that sustained it all along.

If zydeco was a one-trick pony, that might be well and good. However, in the hands of a dedicated musician and songwriter such as Nathan Williams, zydeco is one of the most expressive sounds in roots music. Nathan’s down-home parables are delivered with surprising musical turns and a distinctive Caribbean lilt that reaches back to the very beginnings of Creole culture in Louisiana.

Growing up in a Creole-speaking home in St. Martinville, Nathan eagerly sought out the music of zydeco originators such as Clifton Chenier. When he was too young to actually attend a Clifton Chenier dance at a St. Martinville club, he hovered by the window-sized fan at the back of the building to hear his idol, only to have the bill of his baseball cap clipped off by the fan when he leaned too close. Later, while recovering from a serious illness, Nathan decided to dedicate himself to learning the accordion. That dedication blossomed into an illustrious career, encompassing seven albums and spanning close to two decades.

The music of Nathan and the Zydeco Cha Chas is the expression of a remarkable South Louisiana family. Dennis Paul Williams, Nathan’s brother, brings his jazz-influenced guitar chops to the band. He is also a well-known painter whose work has been shown throughout the country, and who contributed the cover and tray card paintings for their new album, Hang It High, Hang It Low. Keyboardist Nathan Williams Jr. is enrolled in the music program at the University of South Louisiana, while he leads his own band in the Lafayette area. Rubboard player Mark Williams is a cousin who has been with the band since its inception. Manager Sid El Sid O Williams, the eldest Williams brother, is an entrepreneur who has built a remarkable network of businesses in Lafayette, while honing his skills as an accordion contender himself.

Rounding out the Cha Chas is the exceptional rhythm section of bassist Paul Newman and drummer Herman ‘Rat’ Brown, who held the drum chair with Buckwheat Zydeco for many years.

In the world of contemporary African-American music, roots styles are easily categorized as old music, good for sampling maybe, but not music that relates to the lives of mainstream American people. Nathan and the Zydeco Cha Chas might make us think twice about this assumption, for here is uplifting, new music that remains connected to its place in history.