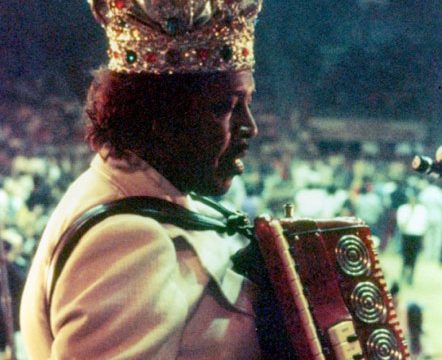 More than a quarter-century following his death, Clifton Chenier is still regarded as zydeco’s best-known and most influential musician. New trends, such as zydeco’s interaction with rap and hip-hop, have inevitably emerged since his passing. Nevertheless, Chenier’s work still sets the standard for contemporary zydeco accordionists and their bands.

Chenier was born in 1925 in the countryside near Opelousas, in the heart of Louisiana’s French-speaking Cajun/Creole parishes. At this time the term “zydeco “ had yet to be coined. Chenier grew up around a varied repertoire that has collectively and retroactively been dubbed “la musique Creole”; the people who played, listened and danced to this music referred to it then as “pic-nic,” and “ba-zar,” and most commonly, “la-la.” By whatever name, it melded Afro-Caribbean rhythms; American-American aesthetics in general, and specific song forms such as the blues; and Cajun songs, some of which can be traced back to medieval France, and the majority of which functioned as dance music. Some scholars and observers also cite traces of Native American music, although these are difficult to discern. In addition, the influence of central and eastern Europe was implicit in this mix due to the presence of the accordion, which had been brought to the region. In the late nineteenth century, by German and Austrian peddlers. And, as the twentieth century progressed, mainstream commercial music of all sorts flooded in via radio and records.

Clifton Chenier absorbed all this music as a child – at live performances, on the radio, and on records by Creole accordionist Amédé Ardoin and by a nationally popular blues artist with the macho moniker, “Peetie Wheatstraw, the Devil’s Son-in-Law.” Chenier’s father, Joseph, occasionally played an accordion at house parties – until his wife slashed its bellows with a razor, thus ending his musical career. But other family members kept on with their music, most notably Clifton’s uncle, Morris Chenier, a fiddler and guitarist who would later play on his nephew’s early records. Clifton learned the most, however, by intently watching such family friends as accordionists Jesse and ZoZo Reynolds, Sidney Babineaux, and Claude Faulk.

In 1947 Clifton Chenier moved to Lake Charles, Louisiana, where he worked a day job at an oil refinery. His growing passion for music led to impromptu performances during his lunch break. Then, at closing time, he would play for tips by the front gate. Well-received by his co-workers, Chenier began performing in public. To meet the demands of his comparatively urban audience in Lake Charles, Chenier expanded the parameters of la-la by adding varying combinations of drums, bass, electric guitar, saxophone, and the frottoir (rub-board), which was played by his brother, Cleveland. Besides this new instrumentation, Chenier also played a dramatically broadened repertoire that incorporated blues, swing, and rhythm & blues. Chenier learned the latest hits by the likes of B. B. King, Big Joe Turner, Fats Domino, and Louis Jordan and His Tympani Five. He adapted these songs to the chromatic piano accordion, and sang many of them in Creole French. While Chenier was not a prolific writer of original songs, he put a strong personal stamp on everything he played and recorded.

Chenier’s innovations constituted a quantum leap for Creole dance music – which, coincidentally, was then acquiring the name that identifies it today. In 1949, blues guitarist Clarence Garlow recorded a great R&B song entitled “Bon Ton Roula.” Its lyrics marked the first use of zydeco as a stand-alone word that denoted both a musical style, and the gatherings where such music was played: “You want to have fun now you got go, way out in the country to the zydeco.” Garlow used “zydeco” as a general term of celebration, with music as just one component. Soon, however, zydeco came to refer specifically to music.

In 1954, Clifton Chenier made his first recordings, in Lake Charles, for a small, black-owned label called Elko Records. The Elko material was leased to Imperial Records, a major label based in Los Angeles that featured such rhythm and blues stars as Fats Domino. Chenier’s name began to circulate nationally. Then Elko’s owner unselfishly introduced his budding young artist to another prominent Los Angeles-based company, Specialty Records. Specialty signed Chenier and put him on a national touring R&B circuit that included a cameo appearance at New York’s famed Apollo Theater. For the next half-decade or so, Chenier worked alongside a virtual “who’s who” of blues, R&B, and rock artists. But his Specialty recordings did not sell, and by the late ‘50s his career had stalled out. He recorded a few singles for the Zynn label out of Crowley, LA, but these did not sell either.

The early 1960s found Clifton Chenier working the Gulf Coast “crawfish circuit” between Lafayette and Houston while languishing without a record deal. Then the great Texas blues guitarist, Lightnin’ Hopkins introduced Chenier to Chris Strachwitz, of the California-based company Arhoolie Records. Chenier and Strachwitz hit it off, commencing a relationship that lasted until Chenier’s death. Chenier recorded prolifically for Arhoolie, gradually building up a loyal following, and frequently performing overseas. Chenier dramatically expanded zydeco’s audience. He became known as its “king,” and appropriately began sporting a crown. As an esoteric regional genre, zydeco’s following – and its record sales – remained miniscule compared to that of Top Ten artists. But Chenier was deeply respected among musicians, and he received mainstream validation by winning a Grammy award for his album “I’m Here!” as the best traditional or ethnic recording of 1983. The album’s title issued a defiant response to people who had written Chenier off when he was temporarily sidelined with the health issues.

Chenier passed away in December of 1987. Chenier’s son C. J. maintains the family tradition with prolific touring and recording; as Clifton observed “Lotta youngsters don’t want to hear about zydeco music, but they got to remember one thing: their daddy been born and raised on that. All them youngsters should follow their daddy’s footsteps sometime.” Clifton Chenier’s legacy and influence also persists in the emergence and growth of festivals and venues that present zydeco – in Louisiana, and around the world – and in the thriving young generation of Creole musicians who continually expanding this music’s parameters while honoring its rich tradition.