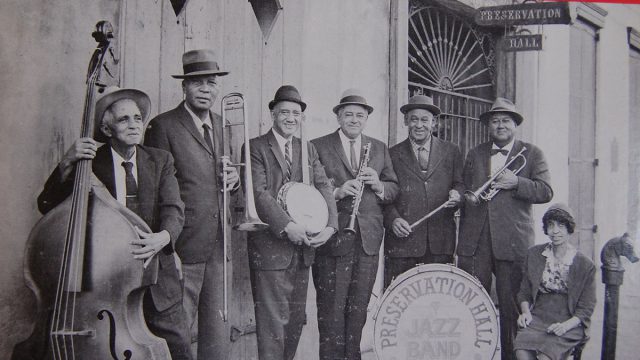 One of the true originals in the story of New Orleans jazz, “Sweet” Emma Barrett was a distinctive figure throughout her 70-year career. A self-taught pianist and singer, Barrett’s eccentricities sometimes threatened to overshadow her considerable talent. She was a pioneer who helped remove barriers for female musicians in a male-dominated field and a beloved ambassador for New Orleans music who traveled the world with some of the most accomplished musicians of her day. With her trademark red beanie cap and garters adorned with tinkling bells, she was known as “the bell gal” to audiences at home and abroad.

Throughout her career, Barrett weathered condescension directed at her from her male peers with a tenacious attitude and good humor, finally winning their respect and playing alongside them not only as an equal but a leader. Her indelible presence onstage was filled with wry wit and double entendres, clearly seen in her delivery on songs like “Jelly Roll Blues” and “A Good Man Is Hard to Find.”

Barrett was born in New Orleans on March 25, 1897. She taught herself to play the piano as a child and was performing publicly by 1910, when she was 12 years old. Though it is believed she never learned to read music, the young Barrett had a remarkable ear and a knack for transposition, and she was able to adjust her playing to the necessary key instantly, purely by ear. She quickly became a popular attraction on the New Orleans music scene and by 1923 was playing piano in the Original Tuxedo Orchestra under the direction of Oscar “Papa” Celestin and, later, William Ridgely. By 1936 she had moved on, performing in the ensembles of musician-bandleaders such as Sidney Desvigne, Armand Piron and John Robichaux.

After a semi-retirement from active performing, Barrett became a featured performer in 1947 at Happy Landing, a club on the Pontchartrain lakefront that looms large in the annals of New Orleans music, beginning a renewal of her presence in the local music scene. In the years that followed, through the 1950s and into the 1960s, she worked with such luminaries as bandleader Percy Humphrey and clarinetist Israel Gorman. During this period she also assembled and toured with her own aggregate of seasoned Crescent City musicians under the name Sweet Emma and the Bells.

In 1960 and 1961 Barrett appeared on record for the first time with the appearance of Sweet Emma and The Bell Gal and Her Dixieland Boys, the latter of which was produced as part of the “Living Legends” series on the Riverside label. The Riverside set featured a seven-piece band that included major figures in jazz such as trombonist Jim Robinson and the Humphrey brothers, Percy (trumpet) and Willie (clarinet). It was from this initial foray into recorded music that she finally gained renown in the outside world. In addition to her distinctive piano playing, Barrett also sang on several songs on these recordings with a unique vocal style that became her second trademark.

The early 1960s stands as the most successful period of Barrett’s career due to her long and fruitful association with the original incarnation of the Preservation Hall Jazz Band. Barrett became the focal point of the band, lending the ensemble a colorful splash of personality that engaged audiences both at home and on their frequent tours. In 1964 Preservation Hall began to produce its own series of recordings with a concert at the Tyrone Guthrie Theater in Minneapolis, Minnesota—featuring Barrett—being the first. Another highlight of the band’s career was an appearance in the 1965 film The Cincinnati Kid, in which Barrett can be seen singing and playing the piano.

Barrett’s career peak during these years was undermined by poor health, and in 1967 a stroke left her partially paralyzed, forcing her to play with only her right hand. Possessed of an indomitable spirit, however, she refused to let the setback end her career, and she began performing again as early as 1968 at the Royal Orleans Hotel. Surviving footage of Barrett post-stroke shows that while her musical abilities were diminished, her spark and stage presence were not. She continued to perform with the same energy and enthusiasm as before until her death in 1983.

Steve Morrison is a musician and freelance writer who worked for the New Orleans Jazz & Heritage Festival from 1998-2005.