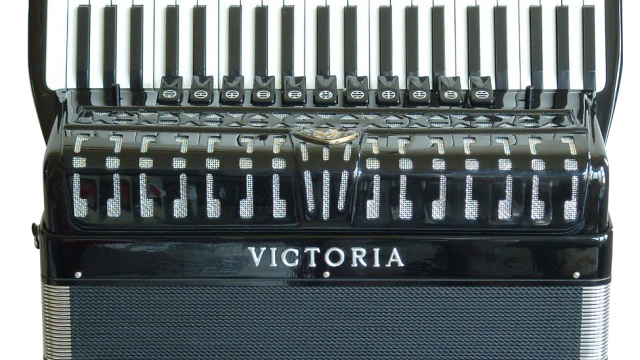 Accordions (from 19th century German Akkordion, from Akkord – “musical chord, concord of sounds”) are a family of box-shaped musical instruments of the bellows-driven free-reed aerophone type, colloquially referred to as a squeezebox. A person who plays the accordion is called an accordionist. The concertina and bandoneón are related; the harmonium and American reed organ are in the same family.

The instrument is played by compressing or expanding the bellows while pressing buttons or keys, causing valves, called pallets, to open, which allow air to flow across strips of brass or steel, called reeds, that vibrate to produce sound inside the body. The performer normally plays the melody on buttons or keys on the right-hand manual, and the accompaniment, consisting of bass and pre-set chord buttons, on the left-hand manual.

The accordion is often used in folk music in Europe, North America and South America, and in some countries, such as Brazil, Colombia and Mexico, it is also commonly used in mainstream pop music. In Europe and North America, it is often associated with busking. Some popular music acts also make use of the instrument. Additionally, the accordion is sometimes used in both solo and orchestra performances of classical music.

The oldest name for this group of instruments is harmonika, from the Greek harmonikos, meaning harmonic, musical. Today, native versions of the name accordion are more common. These names refer to the type of accordion patented by Cyrill Demian, which concerned “automatically coupled chords on the bass side”.