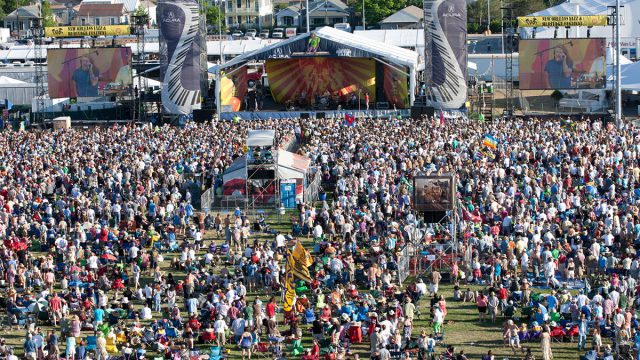 Fair Grounds Race Course, often known as New Orleans Fair Grounds, is a thoroughbred racetrack and racino in New Orleans, Louisiana. It is operated by Churchill Downs Louisiana Horseracing Company, LLC.
In 1852 Union Race Course, which today is the site of Fair Grounds, was laid out on Gentilly Road in New Orleans, making it the second oldest site of horseracing in America still in operation, after Freehold Raceway.
In 2009, the Horseplayers Association of North America introduced a rating system for 65 Thoroughbred racetracks in North America. Of the top Fifteen, New Orleans Fair Grounds was ranked #12, behind Evangeline Downs in Opelousas, Louisiana, which was ranked #6.

The Fair Grounds is also the location of the The New Orleans Jazz & Heritage Festival, often known as Jazz Fest, is an annual celebration – held each year over a pair of three-day weekends; the last weekend in April and the first weekend in May – of the music and culture of New Orleans and Louisiana. Use of the term “Jazz Fest” can also include the days surrounding the Festival and the many shows at unaffiliated New Orleans nightclubs scheduled during the Festival event weekends.