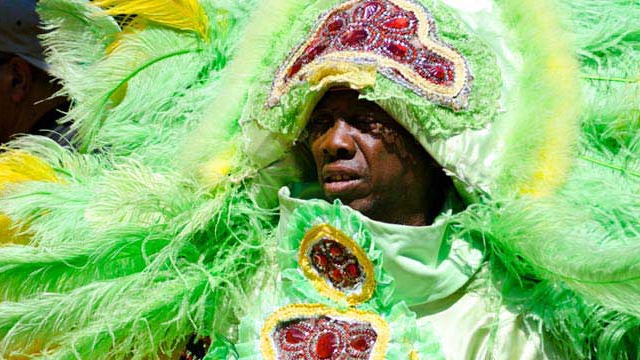 The Mardi Gras Indians are African-American men who form groups known as tribes. On some levels these tribes function as neighborhood social clubs, yet they also have a serious cultural mission. They parade in New Orleans — principally on Mardi Gras Day, but also on other occasions such as Indian gatherings and at second-line parades. They strut, chant, play drums and other forms of percussion (instruments or found objects alike), and engage in ritualized mock battles with other tribes. While doing so they sport elaborate and intricately hand-sewn costumes that are often emblazoned with fanciful depictions of Native American life — hence the name Indians. These costumes are known as “suits,” while the act of wearing one and parading in it is known as “masking Indian.” Mardi Gras Indian suits are made by hand, at communal sewing sessions that may start right after Mardi Gras Day and continue throughout the following year. At this writing, there are approximately 40 Mardi Gras Indian tribes in New Orleans.

It is generally agreed that the Mardi Gras Indian tradition has strong Afro-Caribbean folk roots. Many observers and scholars perceive specific parallels with costumes and music of the junkanoo parades of the Bahamas, and some street celebrations in Haiti. In a broader sense the Mardi Gras Indians represent one of many reflections of New Orleans’ on-going status as an epicenter of African cultural retention in America. The Indians utilize many shared traits of African and African-American music, include call-and-response, syncopation, polyrhythm with a unifying time-line, melisma, the encouragement of spontaneity, and the extremely porous boundary between performers and audiences.

There is considerable debate, however, about the Mardi Gras Indians’ exact origins. One scenario, popular among Mardi Gras Indians themselves, attributes their existence to the historic fact that some Native Americans in Louisiana gave shelter to runaway slaves. In forming tribes, therefore, the slaves’ descendants are showing gratitude for such aid and comfort. This may not be the only source of the Mardi Gras Indians’ emergence, however. Another thesis partially attributes the tradition to the historical fact that Buffalo Bill Cody’s Wild West Show spent the winter of 1884 – 1885 in New Orleans, and that a troupe of Plains Indians from Cody’s show marched in a Mardi Gras parade in 1885. (This was also the first year that a Mardi Gras Indian tribe, the Creole Wild West, took to the streets of New Orleans.) Cody’s show was massively popular in its day, comparable to a hit movie or television series, although its demeaning stereotypes would be quite passé by contemporary standards. Because the show was, in large part, an exploitive depiction of Native American culture — implicitly based upon subjugation and genocide — the idea of Cody’s influence offends many who solely the Mardi Gras Indians as a symbol of interaction between escaped slaves and nurturing Native Americans.

It is conceivable that all of the above-mentioned sources were contributing factors to the Mardi Gras Indian tradition, with the Afro-Caribbean folk roots having the deepest significance by far. Cody’s influence would appear limited to the names that the Mardi Gras Indians gave to their tribes. These names — including the Golden Sioux, the Apache Hunters, the Ninth Ward Navajos, the Young Sons of Geronimo — mainly derived from the Western tribes whose culture Cody co-opted, rather than the Louisiana tribes such as the Houma, or Chitimacha who would actually have taken in escaped slaves. The debate about the origins of the Mardi Gras Indians continues on, with no consensus and no end in sight.

Indisputably, however, the Mardi Gras Indian tradition has inspired a wealth of great music for over a century. In his epic 1938 interview with folklorist Alan Lomax, Jelly Roll Morton recalled seeing Indians on the streets of New Orleans, circa 1900: “Now here’s the way they would sing, uh, when they would be dancing. They’d form a ring and one would get in the center and he’d start his kind of a Indian dance. And they would say, “T’ouwais bas q’ouwais… Hou tendais…” The etymology of these phrases — and other Mardi Gras Indian lines, including “Iko, Iko,” and “Jockamo fee na nay” — is unknown. Scholars and observers have variously attributed them to the Creole, French, Native American, and African languages, or different combinations of all these. Others claim that they are simply meaningless nonsense syllables, akin to doo-wop singing, although this seems unlikely.