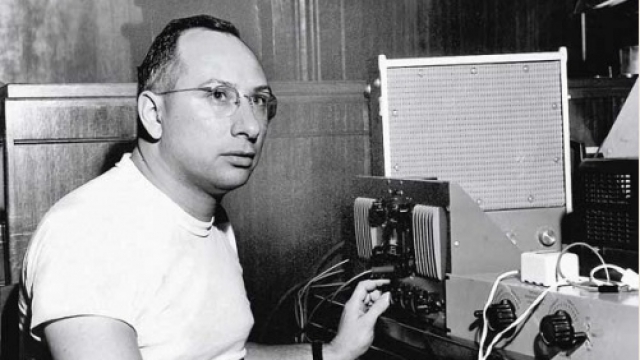 Cosimo Matassa (born in 1926; died 2014) was the pre-eminent audio engineer of the intense period of creativity and commercial success known as the Golden Age of New Orleans rhythm & blues, circa 1947 – 1969. Without Matassa’s technical expertise and intuitive knowledge of music, the Golden Age might never have occurred, and without the national success of local musicians who recorded with Matassa – including Fats Domino and Lloyd Price – national-level stars would not have flocked to New Orleans. Record labels such as Atlantic, Imperial, Specialty, and Chess could easily have worked at less expense in the major cities – New York, Los Angeles, Chicago – where they were based. They opted to send out-of-town artists such as Little Richard to New Orleans, where Matassa and the session players at his studio were thought to possess that intangible feel which guaranteed commercial success. Session musicians would include saxophonists Lee Allen, Herbert Hardesty, and Alvin “Red” Tyler; pianists Edward Frank and Mac Rebennack, later known as Dr. John; drummer Earl Palmer; bassist Frank Fields; and guitarists Justin Adams, Walter “Papoose” Nelson, among many others.

Cosimo Matassa got into the recording industry via his father, John, who owned a jukebox company and kept those jukeboxes stocked with the latest hits. Cosimo began selling used jukebox records, and was increasingly queried about purchasing the latest releases. Matassa began selling new records at the J&M Music Shop at 838 N. Rampart Street in New Orleans’ French Quarter. He also installed recording equipment, which at first was mainly used for vanity pressings by amateur singers (including, years before he became successful, a young Jerry Lee Lewis.) In 1947, Matassa began engineering sessions for professional release by commercial record companies. Working for the New Jersey-based Deluxe label, Matassa recorded the operatic blues-shouter Roy Brown’s “Good Rockin’ Tonight.” This record is now regarded as both a pioneering example of rock and roll and the hit that marked the advent of the Golden Age of New Orleans R&B.

In December of 1949, Fats Domino came to J&M to record “The Fat Man,” which became a huge R&B hit the following year. The record was produced and arranged by trumpeter Dave Bartholomew, Domino’s longtime musical partner. Matassa did not function as a producer per se, which entailed choosing songs, arrangements, and instrumentation, hiring musicians, and deciding which rendition will be used as a final take. Instead, as the engineer, Matassa’s job was to ensure that the producer’s aesthetic decisions were reflected in the finished recorded, product. Matassa achieved this with technology that is quite primitive by contemporary standards. There was no multi-track recording and thus was no option to correct a mistake, so a song might have to be recorded dozens of times to get a suitable final take. An entire band would record through a handful of microphones, which had to be deftly placed in the room to achieve sonic balance. Matassa had an uncanny instinct for doing this effectively, setting a high standard for engineers who followed. Ever self-effacing, Matassa always downplayed his innovative contributions to the art of recording: “Pioneer?” he told journalist Todd Collins. “That’s a guy with an ass full of arrows.”

But people who worked with Matassa recognized his unique abilities. As the great drummer Earl Palmer journalist Tony Scherman: “That little room [Matassa’s studio] was hardly bigger than a bedroom… I think Cosimo was a genius. I’ve seen engineers use two dozen mikes to get the sound he got with three. He knew how to position mikes and he knew each mike like it was a person… Cosimo knew that room, see…” Matassa’s knowledge of that room resulted in such hits as Lloyd Price’s “Lawdy, Miss Clawdy,” Guitar Slim’s “The Things That I Used To Do,” and a string of chart-toppers for Fats Domino. In 1955 Specialty Records sent Little Richard to record at Matassa’s with many of the players who’d made Fats Domino’s records sound so good. The result was Little Richard’s break-out hit, “Tutti Frutti.”

In addition to a forward-thinking perspective on recording, Matassa used his studio to offer a refuge from prejudice and segregation. Behind his closed doors, black and white musicians could play on each others’ sessions at a time when they could not share the stage in public. Matassa took considerable heat for his egalitarian stance, and pulled no punches in his assessment of the cruel realities involved. As he later told WWL-TV reporter Eric Paulsen, “Fats Domino sold 20 million records in a row, and The Picayune never heard about it? Now if he’d gotten in a knife fight, he’d have been on the front page…”

In 1956 Matassa moved his operation to Governor Nicholls Street in the lower French Quarter. There, among many other clients, he worked with producer/arranger/songwriter Allen Toussaint, the wunderkind who made records for the New Orleans based Minit label. Minit’s hits included Jesse Hill’s “Ooh Poo Pah Doo,” Ernie K-Doe’s “Mother-In-Law,” Aaron Neville’s “Over You,” and Irma Thomas’ “It’s Raining.” Toussaint would later set up his own studio, but he established his reputation at Matassa’s facility. While these were great years for Matassa, they were not devoid of problems. In 1963, a dispute with Local 496 of the Musicians’ Union drastically cut into his business, and eventually the union forbade its members to record there at all. In industry parlance, Matassa was blacklisted. In the mid’60s, Matassa moved his studio to the warehouse district, where hits such as Aaron Neville’s “Tell It Like It Is” and Robert Parker’s “Barefootin’ ” were recorded. But the record and recording businesses have always been brutal, and Matassa shut down his studio in 1969 and returned to running his family’s grocery store in the lower French Quarter. With the passing of time Cosimo Matassa has deservingly emerged as a venerated and beloved cultural icon, and an indispensible contributor to New Orleans R&B.