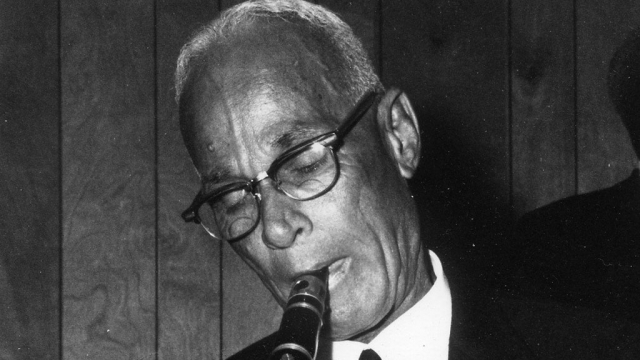 Born in New Orleans Albert Burbank was taught clarinet by Lorenzo Tio, one of that cities most famous clarinet players. He stayed in the New Orleans area throughout the 1920s playing wherever his services were needed. During the thirties, he worked with Kid Milton’s band but was drafted to the US navy during World War II. Upon demobilization, he worked internationally with the bands of Paul Barbarin and Kid Ory but returned to New Orleans where he played with several of the well-known jazz and brass bands in the city. He was regularly seen at Preservation Hall and toured Australia with a band made up from Preservation Hall musicians. In 1975, he suffered a stroke but continued playing until his death on August 15, 1976. Broadcast performances made with Kid Ory’s band at San Francisco’s Hangover Club have been issued on the Danish Storyville label, and some with trombonist, Bill Matthews appear on Southland. Burbank also recorded with Wooden Joe Nicholas (American Music AMCD-5), Herb Morand (AMCD-9 and 106), Kid Clayton (AMCD-62), Paul Barbarin (AMCD-106), Percy Humphrey (GHB Records BCD-85), and Jimmy Archey (BCD-310).