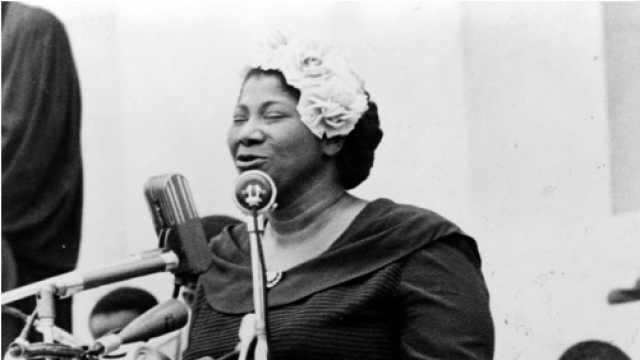 Gospel music is a broad term for Christian religious music – much of which has folkloric roots – that is prevalent in Louisiana’s African-American and Anglo-American communities alike. Gospel music’s core practitioners are found in congregations of various Protestant denominations, although gospel music influence also permeates some Catholic choirs in south Louisiana. For many practitioners of gospel music, the act of singing constitutes a testimony about their personal belief, an effort to proselytize, and a strong sense of community involvement.

The term gospel music per se, to denote such music, came into use in the early twentieth century. Its emergence occurred due in large part to the efforts of the African-American songwriter Thomas A. Dorsey, a.k.a. “the father of gospel music,” whose compositions include “Peace in the Valley” and “Take My Hand, Precious Lord.” But the musical traditions that gospel music encompasses can be traced back to diverse sources in eighteenth-century America, and even further back in both Africa and Britain.

African-American gospel music is rooted in such antebellum song forms as spirituals and ring-shouts. Many such songs used ostensibly religious lyrics and Biblical themes as code-phrases for survival during slavery, and for plans to escape from bondage. Numerous West African aesthetic traits were prominent in this music – sacred and spiritual alike – including rhythmic syncopation, call and response, melisma (the bending of tones, and the stretching of one-syllable words into polysyllabic form), improvisation, and the lack of a porous boundary between performer and audience. (One of the more unique manifestations of African-American gospel music in Louisiana is the traditional ritual ceremony known as Easter Rock, held in the town of Winnsboro, in Franklin Parish. This custom utilizes stylized stepping patterns and foodways traditions in addition to singing.)

While traditional African-rooted traits have continually flourished and remain popular today, a quite different African-American religious style emerged during the latter nineteenth century. Known as jubilee singing, it significantly re-interpreted traditional spirituals by utilizing the European system of precisely annotated non-improvisational music in performances by university/community ensembles and quartets. While jubilee singing is rarely if ever heard today, it left a significant imprint of the classical technique with which it was performed, which is especially prominent in contemporary gospel choral singing.

Anglo-American religious music shares many of the African-American traits mentioned above. It has also shared, along with the African-American community, the tradition of shape-note singing. This simplified system for reading music was devised in the early nineteenth century when large segments of the American populace were minimally literate. Instead of writing music in the full octaves, chromatic scales and bass/treble clefs of conventional musical notation, shape note singing’s a cappella four-part harmony utilized a simplified system of a triangle, circle, square, and diamond. (A modernized and expanded form of shape note singing, known as Sacred Harp, uses a seven-note scale, and retains a loyal core following to this day, among Anglo- and African-Americans alike, primarily in the South.) But Anglo-American gospel music also has roots that reach back further, to the religious music of New England – as compiled, for example, in The Bay Psalm Book, published in 1640 in Cambridge, MA. Much of this material, in turn, is rooted in significantly older music brought to America from Britain.

By the 1920s, a significant new form of gospel arose – a quartet sound that made exquisite use of four-part harmonies, sung in different registers that maximized the dramatic effect of contrasting voices. This style, predominately performed by male artists, remained popular until the latter part of the twentieth century. Popularized nationally by groups such as the Golden Gate Quartet, this style significantly influenced secular music, from groups such as the Ink Spots and the Mills Brothers, to doo-wop singers of the ‘50s, and ‘60s soul groups such as the Temptations, the Four Tops, and Sly and the Family Stone. Still extant today, quartet is now considered old-fashioned, but in a venerable sense that accords it proper respect. Despite the very strong stylistic similarities between such sacred and secular music, many gospel singers, even today, staunchly refuse to sing secular songs, especially blues numbers, which they dismiss as “the devil’s music.”

Distinguished gospel quartets in Louisiana, past and present, include such African-American foursomes as Shreveport’s Ever Ready Gospel Singers, the Jordan Singers from Monroe, the Bolivar Humming Four from Bolivar, Louisiana (Tangipahoa Parish), and two venerable groups – the Zion Travelers from Baton Rouge, founded by the late Reverend Burnell Offlee, and the Zion Harmonizers from New Orleans, founded by the late Sherman Washington. Today, the Electrifying Crown Seekers of Marrero, Louisiana (Jefferson Parish), in existence since 1965, maintain the quartet vocal sound. They do so in modified form, with a full band accompaniment that includes the dynamic vocalist Lloyd Fradieu and the agile guitarist James Williams. Sr.

Some of the most exuberant, intense and exciting electric guitarists in Louisiana have been singing preachers such as the late Reverend Charlie Jackson of Baton Rouge and the late Elder Utah Smith of New Orleans. Smith preached at the Two Wing Temple, which took its name from the song “I Want Two Wings,” a traditional song recorded by Smith and many other gospel artists. Smith dramatized this number by attaching a huge set of faux wings to his preacher’s robe. He accompanied himself on an electric guitar that, during live performances, he tethered to his amp by a long cord that allowed him to roam at will throughout the temple or even play out on the street. Smith’s crowd-pleasing routine was soon adapted by secular artists in New Orleans, most notably Guitar Slim (Eddie Jones), whose 1954 hit, “The Things that I Used to Do” became one of the biggest-selling blues records of all time.

Anglo-American gospel quartets, past and present, have included the Birdwell Brothers, from Marthaville, Louisiana (Natchitoches Parish), and the Plainsmen Quartet from Baton Rouge. A stunning synthesis of black and white gospel music, blues and R&B, western swing and country was forged in the 1950s, in Ferriday, Louisiana (Concordia Parish), by the pioneering rockabilly artist Jerry Lee Lewis. Lewis still performs some gospel numbers on his shows, as do almost all old-school country artists. Lewis’ cousin, evangelist Jimmy Swaggart, plays piano in much the same style, on gospel numbers only; a third cousin, country star Mickey Gilley, is well-versed in both fields. Another high-profile Louisianan, the late Governor Jimmie Davis, performed in a similar country-gospel vein during the mid- and latter phases of his career, at times accompanied by the Plainsman Quartet. This phase contrasted with both the double-entendre blues songs and mainstream country hits of Davis’ earlier years, and his pro-segregation stance as a politician. During the 1980s and 1990s, the Cox Family of Cotton Valley in Webster Parish, gained renown for a blend of old-time country that featured secular and gospel songs alike.

The sound most typically associated with classic gospel music is that of a dynamic lead singer, backed by either a piano, an organ or both – emerged during the 1930s and 1940s thanks to powerful vocalists such Mahalia Jackson, a native of New Orleans, and Emma Jackson of Shreveport. Mahalia Jackson heard such material both in religious settings and as interpreted by secular brass bands whose sound intersected significantly with early jazz. To this day, religious songs such as “When The Saints Come Marching In,” “The Old Rugged Cross” and “Just A Closer Walk With Thee” are performed by traditional New Orleans brass bands and jazz ensembles at jazz funerals and in secular settings alike.

From the mid-twentieth century into the 1970s, gospel-music instrumentation expanded to include the Hammond organ, electric guitar, electric bass, drums, and, in some cases, horns. Lyrics aside, the instrumentation and aesthetics of this religious music were almost identical to that of secular R&B, soul, and funk from the same era. When such exuberant instrumental settings are challenged as inappropriate, gospel musicians often rebut this criticism by citing the scriptural edict to “Make a joyful noise unto the Lord.” The close stylistic similarity between “the devil’s music and God’s music” is further underscored by the fact that many New Orleans blues and R&B musicians go straight from playing Saturday nights gigs at bars (there is no legally mandated closing time in New Orleans) to playing at church services on Sunday morning. “Church gigs” are generally regarded as better-paying jobs under more favorable conditions.

Today, a wide spectrum of gospel music styles can be heard in Louisiana. These sounds include both African-American and Anglo-American musicians and range stylistically from folk-rooted to ultra-modern, from small groups to massive choirs. The past quarter-century has seen the rise of “Contemporary Christian” music, which explores many of the same themes as gospel music, but often with more modern themes. The Contemporary Christian genre is a lucrative enterprise.
Gospel and Contemporary Christian artists include Jo Cool Davis, Trinitee 5:7, Bishop Paul S. Morton, the Greater St. Stephens Baptist Church Choir, all from New Orleans; Ruby Terry of Lake Charles (Calcasieu Parish); Timothy Spell of Baton Rouge; Lottie Collier of Atlanta, Louisiana (Winn Parish); and the Southern Plainsmen Quartet from Hornbeck, Louisiana (Vernon Parish). In the deeply religious and family-oriented world of Louisiana, gospel music will continue to flourish, expand, and adapt with the times while also honoring deep tradition.