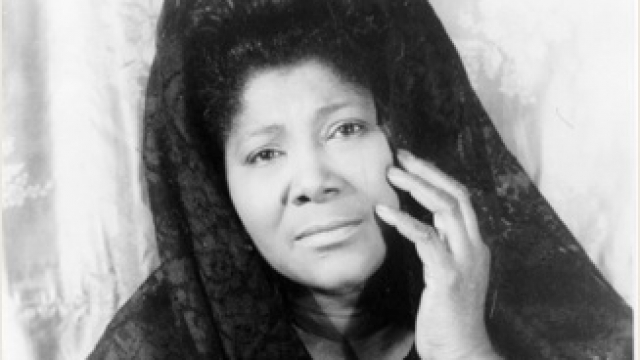 Mahalia Jackson (October 26, 1911 – January 27, 1972) is renowned as one of the most powerful singers in African-American gospel music. Extremely popular and influential, Jackson was a pioneer in performing gospel on the national stage, where it was heard far beyond its African-American community of origin. Jackson has profoundly affected generations of sacred and secular singers alike, Aretha Franklin being one notable example.

Jackson grew up in New Orleans’ Carrollton neighborhood, and was raised by an aunt in a very strict religious household. Initially Jackson’s style was strongly folk-rooted, and grounded in songs known as spirituals; the term gospel music had yet to be coined. She was also influenced by blues music and by the then-new sound known as jazz, which was then making major evolutionary leaps in New Orleans. (Despite Jackson’s strict upbringing, New Orleans jazz bands have always played religious material, especially at funerals.) In keeping with tradition Jackson never would perform such secular material, which was disdained as “the Devil’s music.” Years later, after attaining mainstream success, Jackson said, “The Baptists still watch me like a hawk, now that I’m mixed up in show business.”

But while Jackson would not sing the blues, from early childhood on she did listen carefully to blues records, particularly those by such major stylists as Bessie Smith. “…Bessie [Smith] was my favorite,” she commented, “but I never let people know I listened to her. Mamie Smith, the other famous blues singer, had a prettier voice, but Bessie’s had more soul in it. She dug right down and kept it in you. Her music haunted you even when she stopped singing… I don’t sing the blues myself… But you’ve got to know what the blues meant to us then… The Negroes all over the South kept those blues playing to give us relief from our burdens and to give us courage.”

As a young child Jackson sang at Plymouth Rock Baptist Church, and then moved on to the junior choir at Mount Moriah Baptist Church. At age sixteen, she moved to Chicago where her career would take off. From then on Jackson did not maintain especially strong connections with New Orleans, although the city proudly claims her as a native. In Chicago Jackson began singing professionally with a group called The Johnson Brothers, and co-starred with them in the play From Earth To Glory. Working days as a domestic, Jackson began touring the Midwest, primarily singing at churches. Some northern black audiences were put off by her emotional and obviously southern style. An African-American voice teacher one told her “…you’ve got to learn to stop hollering… The way you sing is not a credit to the Negro race. You’ve got to learn to sing songs so that white people can understand them.” Jackson was not swayed by this advice, however, and her aesthetic decision was vindicated when she signed with Decca Records in 1937.

In the early 1940s Jackson began working with Thomas A. Dorsey, known as “the father of Gospel music.” (Ironically, Dorsey had started his career in the blues field, where he was known as Georgia Tom and had worked with the great blues singer Gertrude “Ma” Rainey.) Jackson’s big break-out recording came in 1948 with the release of “Move On Up A Little Higher,” and her other signature tunes would include “How I Got Over.” By the early 1950s Jackson had emerged as a major star. Her popularity among African-Americans was a given, but her acceptance among white audiences was unprecedented. Success brought Jackson offers to sing secular music from the likes of Louis Armstrong, but she refused. Jackson did sing with Armstrong, however, joining him for some gospel songs at the 1971 Newport Jazz Festival, with backing by the Preservation Hall Band.

Jackson’s growing commercial success brought offers from record companies for her to collaborate with such unlikely accompanists as the virtuoso harpist Arthur “Harpo” Marx, of the comedic act The Marx Brother. Such star status, combined with Jackson’s wealth, and her tours of Europe, led to criticism, from her rivals, that she was abandoning the gospel community. Unfazed by these comments, Jackson appeared regularly on popular television programs of the ‘50s and ‘60s, hosted by the likes of Nat “King” Cole, Dinah Shore, Ed Sullivan, and Studs Terkel. She sang the searing, emotional hymn, “Troubles of the World” at the close of the 1959 film Imitation of Life, starring Lana Turner. She sang at the inauguration of President John F. Kennedy in 1961 and was an active supportive of the Civil Rights Movement.

Jackson sang with gusto at the historic 1963 civil rights event, the March on Washington – just before Martin Luther King, Jr.’s historic speech. One of the few women allowed on the honor dais behind the podium due to her celebrity status and close personal relationship with the King family, it was Jackson’s prodding that convinced King to change his prepared speech.

“Tell ‘em about the dream, Martin,” she said in loud, supportive voice. “Tell ‘em about your dream!” King went on to speak from his heart and deliver the most memorable, extemporaneous thoughts on race relations in America – later known as the “I Have A Dream” speech. In 1968, she overcame her grief and sang at Martin Luther King’s funeral.

Jackson returned to her birthplace only a limited basis. “ I could come back down to New Orleans for wonderful visits with my own people,” she explained, “but I couldn’t stay. Chicago and the North, where I was used to Negroes being more free, was where I belonged.”

Jackson performed in 1970 at the then-new event known as the New Orleans Jazz & Heritage Festival. The great jazz composer Duke Ellington recorded an original composition, “Portrait of Mahalia Jackson” on his New Orleans Suite album, also in 1970.
Jackson passed away in 1972. Following one funeral service in Chicago, another was held in New Orleans, where she was buried.

Ben Sandmel is a New Orleans-based journalist, folklorist, drummer, and producer. Sandmel is the author of “Ernie K-Doe: The R&B Emperor of New Orleans” and Zydeco!”, a collaborative book with photographer Rick Olivier. Sandmel has produced and played on albums including the Grammy-nominated “Deep Water” by the Cajun/country band The Hackberry Ramblers.