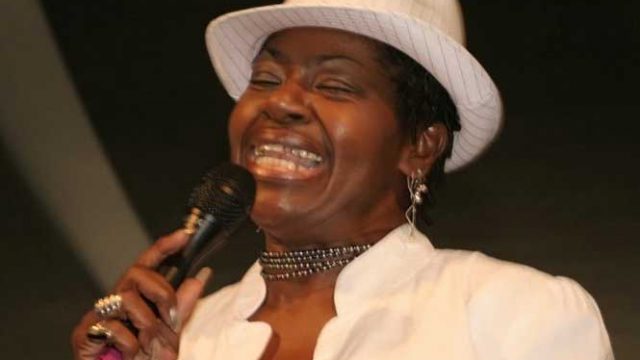 Juanita Brooks, a jazz and gospel singer perhaps best known for her stint in the extremely popular stage production, “One Mo’ Time,” died unexpectedly September 9, 2009 of complications from back surgery. She was 55.

“I consider her one of the greatest singers to have ever come out of New Orleans,” says bandleader/pianist Lars Edegran, whose association with Brooks goes back nearly three decades, and who toured Switzerland with Brooks this past May. “She was a great gospel and traditional jazz singer. She really projected herself well, especially in front of large audiences like at festivals.

“I met her in 1980 or 1981. She’d been doing Aretha Franklin-type material then. I was the musical director for ‘One Mo’ Time.’ Vernel Bagneris (who wrote, directed and starred in the production) and I trained her for the Ma Reed part in the production. In later years we toured France, Italy, Germany, Norway and Sweden many times. We also did tributes to Sweet Emma and Billie Pierce at the Jazz Fest. She also did a Bessie Smith tribute. She could really put herself into other people’s music. She was easy to work with and very professional. Her passing is a great loss to the city’s music tradition.”

Brooks grew up in the Ninth Ward and Mid-City, with most members of her family involved in music. Initially she sang spirituals, but after graduating from U.N.O., she began her musical career singing R&B with Eddie Bo. In 1982, she joined the cast of “One Mo’ Time,” which was enjoying a long run at the Toulouse Theater. Brooks went on to tour with the show’s Australian company and appeared in a performance of the show for German television.

Brooks starred in a musical that Bagneris co-wrote with Allen Toussaint in 1986, “Staggerlee,” which ran off-Broadway. In 1999, she starred in another stage production, “Ma Rainey’s Black Bottom,” which ran at La Petite Theatre. She also performed as a jazz vocalist at Donna’s, Cafe Brazil and Sweet Lorraine’s with area musicians including Bob and George French.