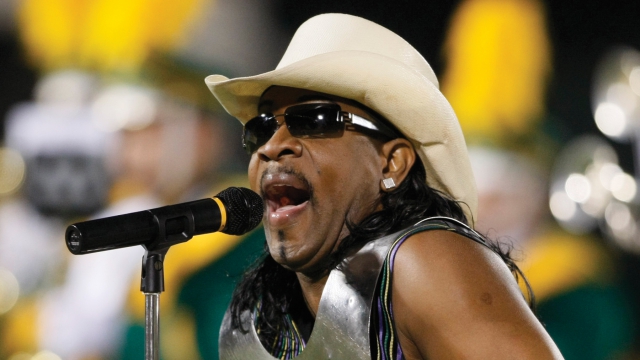 “When Rockin’ Dopsie, Sr. unexpectedly passed away in 1993, the Dopsie family vowed to keep his memory alive, mainly in the incarnation of this band, Rockin’ Dopsie, Jr. & The Zydeco Twisters. In doing so, it’s become its own phenomenon. No other zydeco band has ever been fronted by a washboard player. It’s usually the accordionist, and it’s also a safe bet that there’s never been such a flamboyant personality as Rockin’ Dopsie, Jr., who can turn a house upside down on a moment’s notice.”

The word zydeco is derived from the French les haricots (which translated means string beans), and which is pronounced “lay zah ree’ co.” One supposes that this music must have been played during the harvesting of the bean crop. Little by little, “zah ree’ co” evolved into zydeco.

Zydeco music is a bubbling, melodic gumbo concocted from Cajun/Acadian music, Afro-Caribbean rhythms and melodies, and blues. Over the past few years, this funky and highly danceable music has broken out of its Southern Louisiana breeding ground to enjoy widespread popularity throughout the world.

Rockin’ Dopsie, Jr. (pronounced Doop’ see) & The Zydeco Twisters are the greatest living practitioners of this music. Dopsie, Jr. presents zydeco with the conviction and authenticity of its rich heritage. His earliest musical memories are of his father’s accordion playing. Dopsie, Jr. was given a basic accordion by his father at the age of nine. He taught himself to play, as had his father, by listening to and playing along with the radio.

“I really loved that sound, but I needed more mobility so I could jump up and down and do my splits, you know. I must’ve inherited my love for the blues from my father ’cause I still listen to BB King, Jimmy Reed, the Vaughn Brothers and Bobby Bland, but when I was growing up, the Jackson Five, Sly Stone and James Brown were really happening.” Both genres are evident in Dopsie, Jr.’s performances.

He played in several bands in his early teens, but at age 21 was given his first rub board, a must for the authentic presentation of zydeco. The rub board was his ticket to joining his father’s band, in which he became an official member in 1982. Dopsie, Jr. was then able to play the music that he loved, while dancing like the psychedelic stars of the time.

The team of father and son netted the band international notoriety. Today the Zydeco Twisters’ sole leader is Rockin’ Dopsie, Jr. His brother, Tiger Dopsie, is the band’s drum virtuoso and maintains the highly danceable beat. Anthony Dopsie, a great accordion player, replaced his father in the band playing the button accordion in a manner similar to his father’s, but with the fervor of youth.

Rockin’ Dopsie, Jr. and The Zydeco Twisters have continued to develop in their own right. The junior Dopsie is considered to be the best rub board player in the world, and is a charismatic and electrifying stage performer. His dancing, splits, and audience participation antics make the band’s performances exciting and keep listeners involved and dancing.

Besides having performed extensively on their own tours, the band has shared the stage with Tina Turner, Bonnie Raitt, BB King, The Neville Brothers, Dr. John, and Jimmy Buffet. In 1978 they performed on the song That Was Your Mother (Standing On The Corner In Lafayette, Louisiana), which was released on Paul Simon’s multi-platinum Grammy award-winning album Graceland. The band has also recorded with Cindy Lauper and Bob Dylan (Oh, Mercy&emdash;1989.)

In 1994, Rockin’ Dopsie, Jr. & The Zydeco Twisters performed at the Smithsonian in Washington, DC, on the occasion of the presentation of the late Rockin’ Dopsie’s crown (he was indeed “the King of Zydeco”) for permanent exhibit. Rockin’ Dopsie, his band, and zydeco music were honored by this historic event as they had never been honored before.

Rockin’ Dopsie, Jr. & The Zydeco Twisters, still referred to as “Zydeco’s Royal Family,” have performed in Australia, Italy, France, Germany, Switzerland, Holland, Belgium, Sweden, and many other countries as well as throughout the United States. They have appeared at the most prestigious music festivals and fairs at home and abroad.

The band has made television commercials for Burger King, the Louisiana Lottery, Close-Up toothpaste, Community coffee, Maalox, Danny and Clyde’s and Popeye’s Fried Chicken. They also appeared in the movie Delta Heat which featured several tracks from their Atlantic album.

They were the house band for the Gayle King Show in January of 1998, the house band on Live With Regis And Kathie Lee in January 1999, house band for a week on Wheel Of Fortune in January 2000, played with Harry Connick, Jr. at the Orpheus Ball in New Orleans during Mardi Gras ’98,’99 and ’01, entertained President Clinton and the White House press corps on the White House lawn in September 1999, and danced and sang at the Chicago House of Blues with Dan Aykroyd in May 2000. In February of 2002, Dopsie and his brothers performed with Britney Spears and Mystikal on MTV’s two-hour Mardi Gras special.

Dopsie really heats things up whenever he and the band perform. Above all else, they create a high-energy, audience participation, dance ’til you drop, dynamic show. It all begins when you hear, “Ladies and Gentlemen, Rockin’ Dopsie, Jr. & The Zydeco Twisters!”