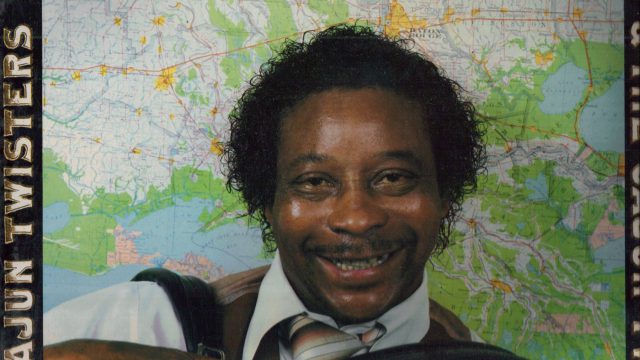 Rockin’ Dopsie was born Alton Rubin on February 10, 1932. Along with Boozoo Chavis and Clifton Chenier, he is widely acknowledged to be one of the originators of the zydeco music. (He was also known as Rockin’ Dopsie Sr. to differentiate him from his son, Rockin’ Dopsie Jr., also a successful musician.)

Dopsie (pronounced DOOP-sie) was an accomplished accordionist, singer and songwriter, as well as a skilled entertainer known for his engaging stage presence and knack for pleasing a crowd. During his formative years, the influences on his music were equal parts Cajun and Creole music, blues, and the emerging rhythm-and-blues that influenced many musicians of his generation. The merging of the disparate styles played by Creole musicians like Dopsie came about naturally and organically in the 1940s, with the hybrid music eventually taking on the name zydeco. (The etymology of the term is disputed, but is most commonly identified as a mutation of les haricots, French for “beans.”)

Dopsie was born and raised in Carencro, Louisiana, a suburb of Lafayette in the heart of Louisiana’s Cajun country. Dopsie’s first language was Creole French, still common in the region. When he was 14 his father bought him an accordion for $2 and he taught himself to play. Father and son would often play music together at home, Dopsie’s father accompanying him on violin. When he came of age, Dopsie moved to Lafayette and began performing in a duo with a washboard-playing relative, Chester Zeno. During that time, Dopsie’s musical heroes were blues artists Slim Harpo and B.B. King. Then in 1955 Dopsie met the man who would have the most profound impact on his musical development, Clifton Chenier, zydeco’s most important founding father. The two became friends and, under Chenier’s mentorship, Dopsie began to realize his full potential as a musician.

In the subsequent years Dopsie refined his style, playing regularly in Lafayette and the surrounding region. He quickly became known for his unique style—he played the right-handed accordion upside-down, essentially making it a left-handed instrument—and for hiring some of the best players on the scene. Never attaining quite the level of success that Chenier enjoyed, Dopsie worked construction by day during those years to supplement his modest income from his live performances.

Dopsie’s recorded output in the 1950s and ’60s was sporadic, but in 1973 he met author and producer Sam Charters, and together they recorded a series of five acclaimed albums on the Sonet label. It was during the sessions for one of these albums in 1978 that John Hart, a highly accomplished zydeco saxophone player formerly in Clifton Chenier’s band, came out of retirement to record with Dopsie. Hart remained an integral part of Dopsie’s band for 15 years.

Beginning in 1979, having achieved a new level of notoriety due to the Sonet albums, Dopsie began to travel to Europe twice a year and played to some of the biggest audiences of his career. At the Montreux Festival in 1987, a crowd of 5,000 braved a rainstorm to dance to Dopsie and his Zydeco Twisters.

In 1985 Dopsie was recruited to play on Paul Simon’s album Graceland. The album’s song “That Was Your Mother” featured music based on one of Dopsie’s original compositions with new lyrics by Simon. Dopsie wrote the music but was not credited for his contribution. This left him out of the album’s publishing and royalties for one of the most popular albums of the 1980s.

In the 1980s and early 1990s, Dopsie sustained a high level of popularity in clubs throughout Louisiana, playing to packed houses everywhere. He released his final album, Louisiana Music, in 1991. He remained a vibrant presence in the New Orleans and Louisiana music scenes until his death in 1993 at the age of 61. The Zydeco Twisters are still active, led by his son Dopsie Jr. on accordion and vocals and another of Dopsie’s sons, Alton Jr., on drums. A third son, Dwayne Dopsie, has also followed in his father’s footsteps as the leader of a band called Dwayne Dopsie and the Zydeco Hellraisers.

Steve Morrison is a musician and freelance writer who worked for the New Orleans Jazz & Heritage Festival from 1998-2005.