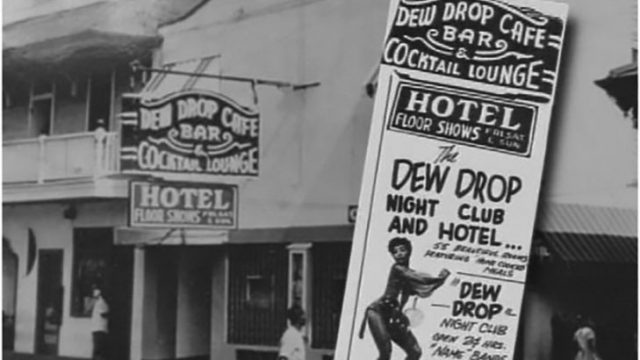 Located on Lasalle Street in Uptown New Orleans, the Dew Drop was a music club, hotel, barber shop, and restaurant owned and frequented primarily by African Americans. The club remained open from the 1940s until the late 1970s under the ownership of the legendary Frank Pania. All the local musicians and entertainment people would play there and hang out there. Any national musician touring the country or the South would stay there or perform there. Everyone from Lloyd Price and Aaron Neville to Ray Charles and Duke Ellington passed through the doors of the Dew Drop and played on its stage. It was a gathering place for the music and entertainment community. Besides musicians, performers included vaudeville acts, comedians, dramatic readings, and a floor show with women and transvestites. This crossroads of so many talented and creative musicians and artists produced interesting anecdotes and interactions. Many stories and songs were inspired by incidents (notorious and otherwise) at the Dew Drop Inn. In addition, The Dew Drop Inn was a mainly African-American club. Sometimes Caucasian-Americans were allowed in, but it very much depended on the politics of the time. The content of the pieces reflects the social, racial, sexual, and psychological milieu of the time besides the personal histories of the club. There are comments about the antics that went on inside as well as the politics of touring, segregation, and police corruption that went on outside.

2) Pianist/composer Allen Toussaint, Deacon John, and guitarist/composer/raconteur Earl King talk about the community of musicians and neighbors who hung out at the Dew Drop and how owner Frank Pania put together bands for gigs.

3) Engineer Cosimo Matassa, singer Irma Thomas, Charles Neville, and others reflect on the vagaries of segregation and how that applied to the Dew Drop Inn.