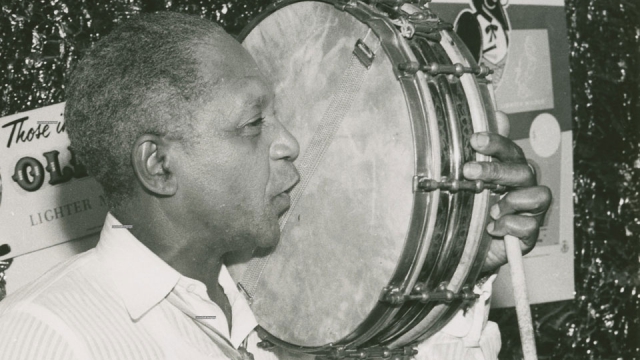 Drummer and vocalist Samuel Hughes Penn (1902-1969) was born in Morgan City, Louisiana, and began playing drums with homemade kits. After taking instruction from Jake Johnson, he joined his brass band. He came to New Orleans in 1924 and worked with Jules Barnes and with Buddie Petit’s band from 1925-31. During the 1930s Penn played with Chris Kelly and Kid Rena’s brass bands, the Eureka, and with Punch Miller. During the 1950s, he led his own band, Sammy Penn and his Five Pennies, which spent some time in Chicago. Throughout his career, he also maintained a close association with Kid Thomas Valentine and was his drummer of choice for many years, including recordings, tours, and regular engagements at Preservation Hall.