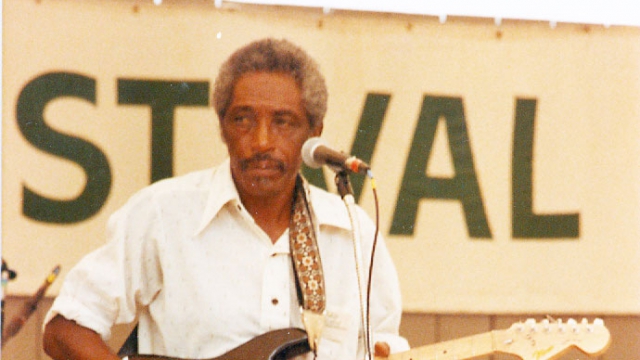 R.L. Burnside (1926 – 2005) was a singular blues singer, guitarist, and farmer who lived and played in the rural areas surrounding Holly Springs, Mississippi. For most of his life he performed in relative obscurity with regard to the general public and blues fans. His style was mostly the one chord drone blues of his native Hill Country combined with Delta blues. He suddenly rose to national popularity in the 1990s through a contract with the Fat Possum record label, an appearance in the documentary Deep Blues, and recordings with the Jon Spencer Blues Explosion. His groundbreaking album, Come On In (1998), with its remixes and loops and modern electronic effects, made him a controversial figure in the blues world. Tours and acclaim followed up until his death in Memphis in 2005. Not only was Burnside’s music loud, good, and unapologetically fun, but he brought an outlaw attitude back to the blues that had long been missing from the nostalgia for its legendary figures.

R.L. Burnside was born in Lafayette County, Mississippi, near College Hill and Oxford. His given name has been reported as being Robert Lee or Rural, and after growing up in Holly Springs, he moved to Chicago in the mid-1940s. In his songs “R.L.’s Story” and “Bad Luck City,” Burnside wrote and sang about his father, two brothers, and an uncle, all murdered with a year in Chicago. He moved back to North Mississippi to work in the agriculture industry alternately as a sharecropper, tractor driver, and fisherman. After first trying harmonica he learned to play guitar as a teenager from the musicians around him, including neighbors like Fred McDowell and Rainie Burnette, as well as other now-obscure musicians in the Hill Country. He also listened to Muddy Waters, John Lee Hooker, and Lightning Hopkins. Burnside played juke joints, picnics, fish fries, birthday parties, and many other big and small social gatherings. He also owned and ran his own juke joints, where he served the region’s legendary (and infamous) bootleg moonshine. At one point he was arrested for murder and sent to the notorious Parchman Farm Penitentiary. His boss arranged to have him released six months later so he could go drive the tractor for the harvest season. “I didn’t mean to kill nobody,” Burnside later said. “I just meant to shoot the sonofabitch in the head and two times in the chest. Him dying was between him and the Lord.”
Burnside’s recording career began in 1967. Folklorist and ethnomusicologist George Mitchell recorded 14 songs in Coldwater, MS with Burnside playing acoustic guitar. Many of these songs were standard blues of the Hill Country such as “Poor Old Mattie,” “Long Haired Doney,” and “Going Down South.” Arhoolie Records released these tracks in 1969 and Burnside played them throughout his career. The music he played was hypnotic, one-chord drone blues with solos that could go anywhere from deep blues to funk to atonal, free-style wildness. It was raw and rough blues. The music feels like it has always been played and could go on forever with a clear, driving West African feel to its rhythm. It remains perfect music for late nights, good times, and low-down grinding and dancing.

Burnside continued working in the farming industry and playing blues at night and weekends. He did a few recordings for the Vogue, Swingmaster, and Highwater record labels, but his next break came in 1991 when journalist Robert Palmer and Eurythmics guitarist Dave Stewart made a travelogue documentary called Deep Blues. The documentary featured Burnside as well as his fellow Hill Country bluesman Junior Kimbrough playing at home and in Kimbrough’s juke “Junior’s Place” (in Chulahoma) as well as just talking on the front porch. This documentary is required viewing for anyone with an interest in blues music, its origins, and its current state.

The same year Deep Blues was released, Fat Possum Records (of Oxford, Mississippi) released Burnside’s first real album, Bad Luck City, followed by 1994’s Too Bad Jim. These records were made live in the studio with son Duwayne on bass, son-in-law Calvin Johnson, and his “adopted son” Kenny Brown on second guitar. These recordings were soon heard by popular rock musicians such as Iggy Pop, Bono, and others. The Jon Spencer Blues Explosion, one of the most explosive acts of the 1990s, upon hearing Burnside, came to North Mississippi to play on his next album for the Matador label, An Ass Pocket Full of Whiskey (1996). This album continued the high energy and raw blues of his Fat Possum recordings and reached the attention of a younger, whiter audience when he toured the country with the Blues Explosion or on the Fat Possum Blues Caravan tour. The audience responded both to the raw music and the outlaw image that Fat Possum and Burnside cultivated. He projected a menacing, hard-living image even from the stage where he would drink openly straight from a whiskey bottle. The music reflected this outlaw sensibility, even if by most accounts Burnside was a generous and gregarious man.

His next record, Mr. Wizard (1997), continued in a similar vein as his previous recordings, but it was 1998’s Come On In that provoked serious musical controversy. Fat Possum executives gave several of Burnside’s tracks to producer Tom Rothrock – a man famous for producing much of Beck’s early work – and he remixed them, adding loops and electronic effects. Rothrock’s production gave it an innovative, distinctive, modern edge, updating the blues for new audiences. Blues purists were outraged at the sacrilege but most fans loved the album, which received positive reviews.

Burnside continued releasing albums in the mold of Come On In — with one-chord drones grounding electronic soundscapes – yet to a lesser degree (e.g., Wish I Was In Heaven Sitting Down (2000) and Bothered Mind (2004)). His songs appeared on the soundtrack of The Sopranos as well as in movies such as Big Bad Love and the Fat Possum documentary, You See Me Laughing. He was honored at the Bonnaroo Music Festival in 2004 with many of his children and fans — including the North Mississippi All Stars – performed a set of his music in tribute to him.

Burnside suffered a heart attack right after the Bonnaroo Festival and had bypass surgery. His health continued to decline and he passed away in a Memphis hospital on September 5, 2005. He is buried in Free Springs Cemetery in Harmontown, MS.