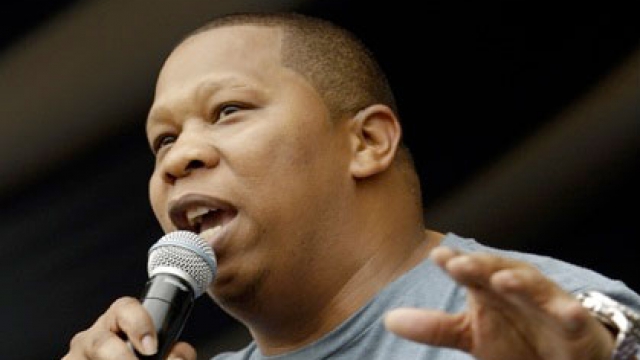 Mannie Fresh is a Grammy-nominated DJ, producer and rapper from New Orleans. He was the sole in-house producer for Cash Money Records for over a decade and has since found continued success as an independent artist after leaving the label in 2005. He is widely considered one of hip-hop’s best producers.

Mannie Fresh was born Byron O. Thomas on March 20, 1969 in New Orleans’s Seventh Ward. His mother, a teacher, and his father, the popular local street DJ Sabu encouraged their son’s musicality from an early age. For holiday gifts, his parents bought Mannie musical instruments rather than toys, and it didn’t take long before Fresh knew he wanted to pursue a career in music. He started out DJing school dances in New Orleans and quickly made the transition to small local venues and house parties. At parties, he combined the sound of the iconic Roland TR-808 drum machine with an analog keyboard to create a live performance sound. Fresh’s stage name came from his father (who called him Mannie) and the popular street term for shoes in the ’80s, “fresh kicks.”

While still in his teens, Mannie formed the group New York Incorporated, one of the first New Orleans rap groups. The band consisted of Fresh, childhood friend Mia X (who went onto international fame with No Limit Records) and Denny D, a New York transplant. Yet his first local notoriety came from his collaborations with local rapper Gregory D.

Following major label disappointments with Gregory D and a brief stint in California, Fresh came back in New Orleans. Brothers Bryan “Birdman” Williams and Ronald “Slim” Williams hired Fresh as a producer for their new music label, Cash Money Records. His production for the Hot Boys (Juvenile, B.G., Turk, and Lil Wayne) and his own rap duo Big Tymers (with Birdman) launched the Cash Money label on the road to international success. (For example, the Big Tymers “Still Fly” received two Grammy nominations in 2002.) Cash Money started out as a label for bounce music, New Orleans’s own dance-centric rap genre. Fresh was among the first producers to take elements of bounce and combine them with other genres of music, from classical to reggae. This successful new synthesis resulted in international hits such as Juvenile’s “Back That A$$ Up” and brought bounce to increasingly wider circles of listeners around the world.

Fresh’s signature sound is characterized by a number of elements: the intricacy of his drum patterns, the use of live instrumentation in his beats, his combination of bounce with other musical genres, and the influence of New Orleans brass bands in his production. Blasting horns and second line snare and drum patterns are at the center of his sound. Much of his classic Juvenile album, 400 Degreez, was played live by musicians in the studio rather than sequenced.

After leaving Cash Money in the mid-2000s, Fresh reinvented himself as a solo artist, beginning with the release of Mind of Mannie Fresh – a successful album featuring the charting single “Real Big.” The following year he signed with Def Jam South, then formed his own subsidiary label, Chubby Boy Records. He has worked with many top artists, including Kanye West (for 2012’s Cruel Summer) and rapper/actor Mos Def, among many others. With 2 Chainz, he shot the Hot Boys reunion video, “Used 2” (2013), using his own Seventh Ward neighborhood as the setting. Fresh reunited with Lil Wayne in 2014 to work on the much-anticipated Tha Carter V, but it has been held up in the courts due to a monetary dispute with Birdman and Young Money Records.

In 2015, Mannie Fresh was among the first local rap artists to be interviewed onstage at the New Orleans Jazz and Heritage Festival Allison Miner Stage. A beloved figure in New Orleans, Fresh continues to perform with live bands, tour as a celebrity DJ, and produce for a diverse group of artists, including the all-female New Orleans Pinettes Brass Band. He is an outspoken advocate for post-Katrina New Orleans.