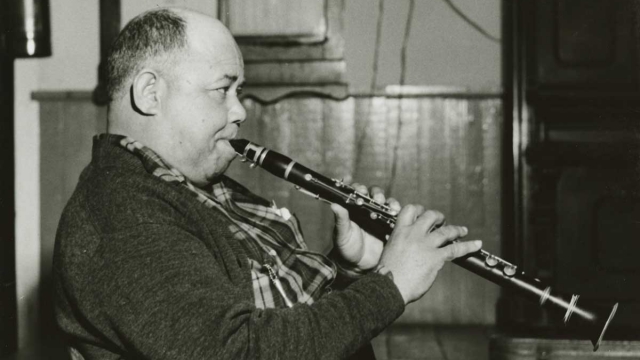 Afro-French Creole clarinetist and tenor saxophonist Louis Albert Cottrell Jr (1911-1978) was the son of drummer Louis Cottrell Sr. (1878-1927), who worked with John Robichaux, the Olympia Orchestra, Manuel Perez, and A.J. Piron. Cottrell Jr. took instruction on clarinet from Lorenzo Tio Jr. and Barney Bigard and from 1925 worked with the Golden Rule Orchestra, Paul Barnes, Kid Rena, and with Sidney Desvigne on the riverboat S.S. Island Queen. In the 1930s he toured with Don Albert’s band, returning to New Orleans in 1939. In the 1940s and 50s he alternated among the bands of Paul Barbarin, Sidney Desvigne, and Armand Piron. From the 1960s he led his own bands and worked as a sideman with many others, including Peter Bocage, Jim Robinson, Dejan’s Olympia Brass Band, and the Onward Brass Band. From 1956 until its merger with the white local in 1970, Cottrell was president of American Federation of Musicians Local 496, the African-American union.