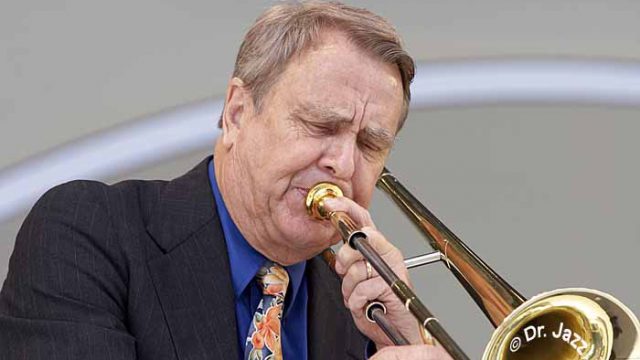 The only member of the Preservation Hall band who was not born and raised in New Orleans, Demond developed his love for New Orleans Jazz from far away in the American west. In the early forties, after hearing the legendary trombonist Kid Ory, he sought out New Orleans musicians who had settled in the Los Angeles area; the banjo master Johnny St. Cyr, who had played with Louis Armstrong and his predecessor King Oliver, pianist Alton Purnell, who had been born in the building that would become Preservation Hall, and the great George Lewis, an eventual fixture at the Hall, frequently visited and jammed at his family’s home. An encounter during his college years with “Big” Jim Robinson persuaded him to switch from banjo to trombone as his main instrument. Ory and Robinson remain his musical inspirations. It was through “Big” Jim, that Frank became friendly with the early Preservation Hall Band during its tours to California in the early 1960’s. While visiting New Orleans in 1965 Frank was invited to sit in with the group; the experience inspired him to move to the city in the late sixties. Because Robinson held the trombone chair, Frank mainly played banjo with them, though he did play trombone with assorted parade bands between dates at Preservation Hall. When asked how he knew he was a permanent member of the band , Frank replied “No one ever told me to go home!” For a while he also ran his own record label, Smoky Mary Phonograph Company, for which he supervised recordings by Kid Thomas, Albert Burbank, Sweet Emma Barrett, and other giants. When Jim Robinson passed away in 1976, Frank took his place in the front line at Preservation Hall, though ten years would pass before he would play the horn that Robinson had bequeathed to him. Frank and his wife Christie now divide their time between New Orleans and southern California, but his ties to New Orleans are deep, and as the senior member of the Preservation Hall Band he is an important part of its legacy as well.