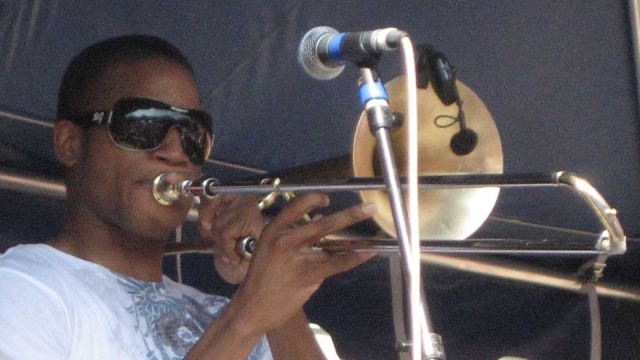 Troy Andrews (born 1986), known professionally as Trombone Shorty, is a New Orleans-based trombonist/trumpeter/drummer and singer whose eclectic repertoire encompasses traditional and modern jazz, New Orleans second-line rhythms, funk, rock, rap/hip-hop and more. He is both a reverent standard-bearer of New Orleans tradition and an eager young innovator who expands that tradition’s parameters. At this writing, Andrews enjoys international prominence and star stature as the most successful musician to emerge from New Orleans since Harry Connick, Jr. Like many New Orleans musicians, Andrews represents a musical dynasty. He is the grandson of the R&B singer and songwriter Jesse Hill, of “Ooh Poo Pah Doo” fame. Andrews is also related to both the Lastie and the Nelson families, and the extraordinary drummer Herlin Riley (see the Music Rising entry on the Lastie Family for additional information.) In addition, Troy Andrews’ brother James Andrews and cousin Glen David Andrews, who play trumpet and trombone, respectively, are both well-known and well-respected musicians, both locally and afar.

Troy Andrews grew up in New Orleans’ culturally vibrant Tremé neighborhood, steeped both in New Orleans jazz and R&B per se plus such music-related traditions as second-lining. His father, James Andrews Sr. — a member of the Bayou Steppers Social Aid & Pleasure Club — frequently invited his musician friends visit the house, including Danny Barker, Milton Batiste of the Olympia Brass Band, Anthony “Tuba Fats” Lacen, and members of the Dirty Dozen Brass Band. Troy’s grandfather, Jesse Hill, spent a considerable amount of time with the family as well. The late, great R&B/funk drummer, Wilbert “Junkyard Dog” Arnold, lived across the street, and many other musicians lived closed by. In this environment, in a house full of instruments, Troy Andrews took to music at a very young age. “It was obvious [that he had talent] when he was like three,” elder brother James Andrews told journalist John Swenson; ‘Maybe even when he was one.”

Troy Andrews began performing semi-professionally by the age of four and played trombone with an adult band at the New Orleans Jazz & Festival the following year. At the time he was barely as tall as his instrument – hence the nickname which Andrews has kept ever since, despite physically outgrowing it. Initially Andrews was viewed as a mere cute-kid novelty act, but his prodigious and precocious talent became increasingly. At age seven, Andrews started playing for tips in New Orleans’ Jackson Square, leading his own group, the Tiny Toones Brass Band. As Andrew’s name- recognition and credibility continued to expand, the Andrews family capitalized on this by opening a nightclub in Tremé called Trombone Shorty’s. “My mom… used to let me come in every once in a while and play,” Andrews told John Swenson, “but only for like ten minutes because I was too young…”

As a teenager Andrews played on the streets of New Orleans as a member of the Stooges Brass Band. He also studied diligently at the city’s acclaimed arts high school, the New Orleans Center for the Creative Arts. After graduation Andrews joined the band of rock and retro-funk guitar star Lenny Kravitz and began touring extensively on a high-profile level. By this point Andrews was already a mature instrumentalist with a solid knowledge of music theory, musical notation and the like; working with Kravitz added another facet to Andrews’ talent by turning him into a seasoned performer who could connect with large audiences. With his career skyrocketing, a move to Los Angeles or New York might well have been logical. But Andrews pointedly remained based in New Orleans, especially after Hurricane Katrina, and he still calls the Crescent City home. “I am New Orleans,” he told Swenson; “I grew up in one of the richest musical neighborhoods in the city, the Treme neighborhood. Music was everywhere, always surrounding me. I can’t leave New Orleans any more than it can leave me.”

Andrews’ next major career move was forming his own band, which he named Orleans Avenue. The group plays a New Orleans-rooted blend of jazz, funk, pop-rock, and hip-hop, as heard on three albums that have garnered great commercial and artistic success alike: Backatown (2010), For True (2011), and Say That To This (2013.) (On his most recent album, Andrews achieved a feat that had eluded many music-industry leaders for years. He persuaded all the members of the Meters, New Orleans’ pre-eminent funk pioneers, to join him in the studio to re-record the group’s 1977 song “Be My Lady.” I got a chance,” Andrews recalled, “to experience what it used to be like when The Meters made all those classic records. I had the chills while it was going on.”) Another indicator of Andrews’ stature is that he now closes the annual New Orleans Jazz & Heritage Festival by plays the last slot, on the last day, on the festival’s biggest stage.

By the time that HBO’s New Orleans-based television drama Treme premiered in 2010, Trombone Shorty was so well known that he appeared in the series playing himself, instead of portraying a fictional character. In 2012 Andrews performed for President and Mrs. Obama at the White House as part of the PBS documentary, In Performance at the White House: Red, White & Blues. Andrews, always conscious about giving back to the New Orleans community, has created The Trombone Shorty Foundation, which donates new instruments to public schools. In partnership with Tulane University, this program subsequently evolved into the Trombone Shorty Academy for aspiring musicians.