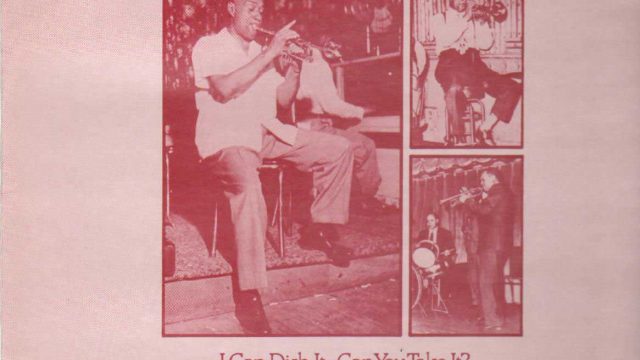 Born in New Orleans, Collins played in brass bands as a teenager, including The Young Eagles, The Columbia Band, and the Tuxedo Brass Band. In the 1910s he played in New Orleans alongside Louis Armstrong, Papa Celestin, and Zutty Singleton. He moved to Chicago in 1924, where he replaced Louis Armstrong in King Oliver’s band. He also played with Jelly Roll Morton but the two had disagreements and fell out when Collins claimed that Morton stole the song Fish Tail Blues from him. He returned to New Orleans. There he played on the recordings of the Jones-Collins Astoria Hot Eight in 1929 before playing in New York City with Luis Russell in 1930 and then heading back to Chicago. There he played with Dave Peyton (1930), the Chicago Ramblers (1932), Johnny Dodds and Baby Dodds, Zutty Singleton, Mezz Mezzrow, Lovie Austin, and Jimmy Bertrand (1945). Collins played in Chicago through the 1930s and 1940s as an accompanist to many blues singers and in nightclubs. After 1945 he led his own band at the Victory Club on Clark Street in Chicago, and gigged with Chippie Hill (1946), Kid Ory (1948), and Art Hodes (1950-51). He played in Europe with Mezz Mezzrow in 1951 and 1954 and in California with Joe Sullivan in 1953. In the mid-1950s he retired due to illness.

Collins wrote an autobiography, Oh, Didn’t He Ramble, with the aid of his wife Mary and two editors which was published in 1974.