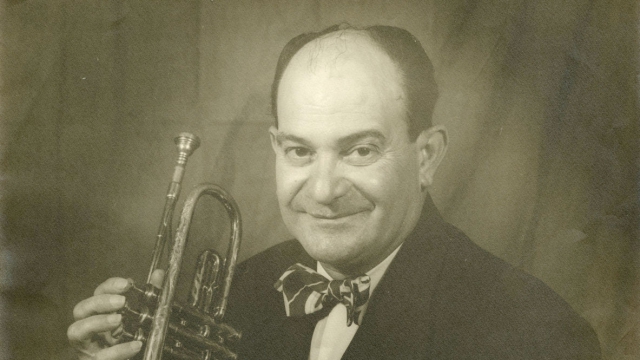 Born in New Orleans as Joseph Gustave Bonano, Sicilian-American trumpeter and vocalist Sharkey Bonano (1902-1972) grew up at Quarella’s, his brother-in-law’s dance pavilion in Milneburg, a resort on Lake Pontchartrain. He was given a trumpet by Buddie Petit in 1917 and followed Petit, Joe Oliver, and Sam Morgan in brass band parades. Sharkey learned how to read music after failing an audition in New York to replace Bix Beiderbecke in the Wolverines in 1924. He returned to New Orleans in 1925 to lead his own band and to record with Norman Brownlee. In 1928, he co-led the Melody Masters with Leon Prima on the steamer Greater New Orleans and later led a band at the Chez Paree near West End. He recorded for the first time as a leader in New Orleans in 1936, with Armand Hug on piano, and then spent several years in New York, where he recorded for the Brunswick label and began an association with Nick Rongetti, the owner of Nick’s in Greenwich Village, inaugurating a jazz policy there. After World War II, fueled by the New Orleans revival, Sharkey led a popular band in New Orleans that recorded extensively and continued to tour into the 1960s.