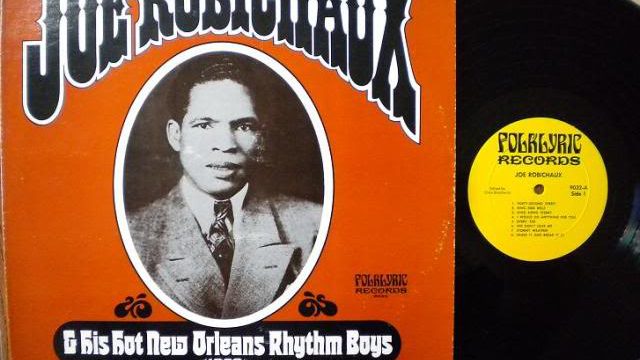 Joe Robichaux played piano from a young age and studied at New Orleans University. After working in the O.J. Beatty Carnival, he played with Tig Chambers briefly in 1918. He then returned to New Orleans and played with Oscar Celestin, Earl Humphrey, Lee Collins, and The Black Eagles (1922-23). He arranged for the Jones-Collins Astoria Hot Eight in 1929 and also recorded with them; he also accompanied Christina Gray on record that year. In 1931 he formed his own ensemble, which featured Eugene Ware on trumpet, Alfred Guichard on clarinet and alto saxophone, Gene Porter on tenor sax, and Ward Crosby on drums; they went to New York City to record for Vocalion in August 1933, laying down 22 stomping, uptempo sides and two alternate takes in a marathon five-day recording schedule. Problems with the musicians’ union in New York prevented them from being able to play live there, and they returned to New Orleans not long after recording. Robichaux expanded the size of his ensemble over the course of the 1930s; Earl Bostic was among those who joined its ranks. They toured Cuba in the mid-1930s and also recorded for Decca Records in 1936, which unfortunately were rejected.

In 1939 Robichaux’s ensemble disbanded, and he found work performing solo, mostly in New Orleans. He recorded as an accompanist on R&B recordings in the 1950s, and played with Lizzie Miles. Late in his life he played with George Lewis (1957-64) and Peter Bocage (1962); he also performed at Preservation Hall. He died of a heart attack at the age of 64 in 1965.