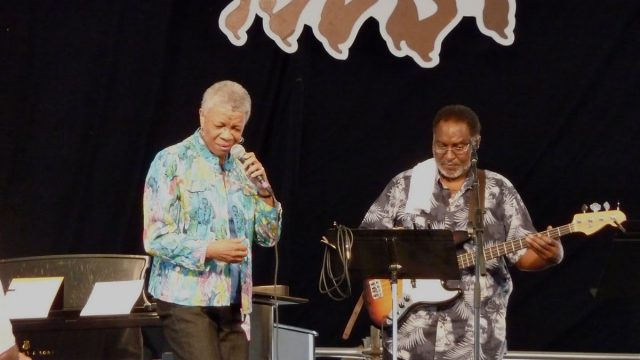 George French’s musical profile is usually defined by whoever happens to be hearing him at the time. French is a singing bassist with an extensive background in New Orleans jazz and rhythm and blues. Pick up any of a dozen New Orleans-made hit records of the 1960s and you’ll probably hear French.

George French began training and performing at an early age as a vocalist in grammar school. His musical training as a bassist started as a teenager. With no professional instruction; his musical style developed through “on-the-job-training.” French’s major influences during his musical development were, among others, his father, Albert “Papa” French, Sr., George Davis, and Sam Jones. “Papa” French served as his role model for musical professionalism, business style and commitment to performing. George Davis, his first teacher, ignited his desire to play bass while Sam Jones served as his mentor for musical style.

Over the span of his career, French has had the pleasure of working with many of New Orleans finest musicians, whether on a stage or in the recording studio. On stage, many of the bands include: Willie Tee and The Souls, Bob French and The Continentals, Red Tyler and The Gentlemen of Jazz. His impressive recording career as earned him studio time with Earl King, Robert Parker, Bob French and The Storyville Jazz Band, The Dukes Of Dixieland, The James Rivers Quartet and Wendell Brunious. His most favorite and notorious recording project to date, is “Celebration of the Voice,” recorded live for Rounder Records and produced by local producer Scott Billington. “Celebration of the Voice” was a concert series held at the New Orleans Contemporary Arts Center (CAC) and a local all-star big band was assembled for the event. The high point of the show, however, was the vocal performances of George French, Germaine Bazzle and the late Johnny Adams. Each artist performed several tunes and then they all came together to perform “Mood Indigo” and “Exactly Like You.”

World traveled, French continues to entertain the masses yearly at the New Orleans Jazz & Heritage Festival and on a regular basis on many of the stages around the great city of New Orleans.