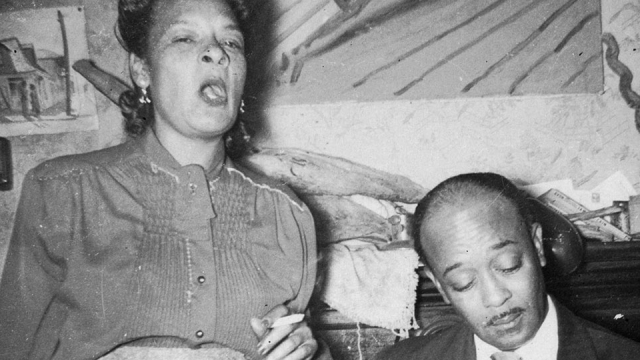 Danny Barker (1909 – 1994) was a traditional jazz banjo player, guitarist, and ukeleleist, and an expressive singer with a declamatory, drily humorous style. Barker was also a fascinating raconteur and memoirist — both verbally, and in print, as the author of several invaluable books about New Orleans jazz, written from the unique perspective of an observer/participant. His wife, Blue Lu Barker (née Dupont, 1913 – 1998) was an accomplished blues and jazz singer best known for their joint composition “Don’t You Feel My Leg,” a.k.a. “Don’t You Make Me High,” recorded in 1946. New Orleanians adored and respected Mr. and Mrs. Barker for their musical talent and knowledge, their wisdom, and their legendary kindness.

Danny Barker came from one of New Orleans’ great musical dynasties — the Barbarin family, which still remains active today. His grandfather was the renowned cornetist, alto saxophonist, and bandleader, Isidore Barbarin, a jazz musician whose career preceded that of such famed figures as Louis Armstrong and Sidney Bechet. The great drummers Paul, Louis and Lucien Barbarin were Barker’s uncles, as was cornetist William Barbarin. Accordingly Danny Barker started out playing the drums, and the clarinet, before switching to stringed instruments. Barker formed his first group, the Boozan Kings, as a teenager. Barker played banjo in this group, which combined real instruments with utilitarian items that served as instruments such as washboards, washtubs, saws, and empty bottles. Barker referred to this group as a spasm band; such aggregations were also known as jug bands, and their improvisatory musical approach shared many elements of early jazz.

In his late teens, Barker toured Mississippi with the great blues, jazz, and ragtime pianist Little Brother Montgomery, among other artists. In 1930, at age 21, Barker moved to New York where, for the next decades he would perform and sometimes record with a pantheon of top-tier artists including Jelly Roll Morton, the jump blues and proto-R&B bandleader Lucky Millinder, the dynamic singer and urbane entertainer Cab Calloway, the multi-instrumentalist and composer Benny Carter, and the proto be-bop pianist Sir Charles Thompson, on a session that also included saxophonist Charlie Parker. Beyond stellar performances per se on recordings, Barker also made significant contributions to the documentation of musical and cultural traditions that might otherwise have disappeared. The album Jazz A La Creole by Nick and his Creole Serenaders is a case in point. This material was recorded in 1947, and released in the 78 rpm format, by the Circle label. It featured several risqué double-entendre songs, sung in Creole French to Afro-Caribbean rhythms, including “Les Ognons” and “Salée Dame.” On these numbers Barker engaged in a call-and-response vocal dialogue with the lead singer and bandleader, the great New Orleans clarinetist Albert Nicholas. Barker also played guitar on this album. In the mid-1950s Barker made another seminal recording — “Indian Red,” released on the King Zulu label — which was one of the first recorded songs to pay tribute to the Mardi Gras Indians.

In 1960 Barker performed at the Newport Jazz Festival with the great ragtime pianist Eubie Blake. In 1965 Barker moved back to New Orleans where, in 1970, he founded the Fairview Baptist Church Brass Band. At the time, traditional New Orleans jazz and brass-band music had reached a low ebb of popularity and the virge of extinction. Young audiences and musicians scorned it as irrelevant, dying music for old people. Barker played a pivotal role in creating a resurgence for such music that continues to evolve at this writing. Players of future prominence who came up through the Fairview Baptist Church Brass Band included trumpeter Wynton Marsalis, saxophonist Branford Marsalis, clarinetist Dr. Michael White, trumpeter Nicholas Payton, drummer Shannon Powell, and trumpeter Gregory Davis. Davis co-founded the Dirty Dozen Brass Band, one the first progressive groups to meld brass-band tradition with an eclectic contemporary repertoire. The Dirty Dozen represented the first generation of brass-band revitalist that is epitomized today by groups such as the Soul Rebels.

In addition to playing and hands-on musical training, this era also found Danny Barker working as an assistant to the curator of the Louisiana Jazz Museum. This private organization eventually morphed into the state-run Louisiana Jazz Museum, which acquired all of its artifacts including Louis Armstrong’s first cornet. Since the 1940s, when Barker formed the Jazzland Research Guild, he had been saving jazz ephemera, and writing a journal to document his own memoirs and the reminiscences of his colleagues. These undertakings led to Barker writing three books: A Life In Jazz, Bourbon Street Black: The Black New Orleans Jazzman, and the posthumously published Buddy Bolden and the Last Days of Storyville. An annotated book of additional Barker writings is slated for publication by the Historic New Orleans Collection.

By the 1980s Danny and Blue Lu Barker attained the deserved status of venerated elders who were frequently interviewed for articles and documentaries about New Orleans music. In 1998 Danny recorded a fine album entitled Save The Bones for Henry Jones; the sly and ambiguous sexual humor of the title track epitomized his understated, street-wise wit, as did his ad-libbed comments on a rendition of Saint James Infirmary. a mainstay of the traditional New Orleans jazz repertoire. Barker also contributed priceless monologues to the album Jelly, the Dirty Dozen Brass Band’s tribute to Jelly Roll Morton, and also to Dr. John’s Going Back to New Orleans.

Although slowed down by ill health Danny Barker continued to perform, and he rode as the King of the Mardi Gras parade of the satirical.counter-culture Krewe du Vieux, shortly before his death in 1994. Blue Lu Barker passed away four years later. Much of Danny Barker’s archival material remained in their house, which flooded during Hurricane Katrina. Fortunately a great deal of these papers were rescued and restored by the Hoagn Jazz Archive at Tulane University.

Barker Danny, edited Alyn Shipton. Buddy Bolden and the Last Days of Storyville. New York, Continuum, 2001. (this is not the original pub date but this edition is probably the most easily available. Not sure if this was pub’d posthumously.)